Candace Osmond
Candace is a busy lady, and can often be found at a desk writing away. Whether that be on a fresh new article, or workshopping ideas for her next book. Outside of being a published author, Candace is a keen LEGO fan and this love of LEGO is undoubtedly one of the key factors as to why she is such a great creative writer, so it only seemed natural to combine the two.

Are you planning to get your hands on the newest LEGO Hulkbuster? Announced in February 2018, the toy set caused extreme excitement among Marvel fans.

For those unaware, Hulkbuster is the gigantic Iron Man suit developed to battle with the Hulk. Check out the unique features of the new 76105 LEGO Hulkbuster: Ultron Edition and what I think about it!

When Did LEGO Make the Hulkbuster Set?

The LEGO 76105 Marvel Super Heroes The Hulkbuster: Ultron Edition was launched in March 2018. It’s based on the Hulkbuster armor of Iron Man in the Avengers: Age of Ultron that appeared on the big screen in May 2015.

There’s also a LEGO Marvel Superheroes Hulkbuster Smash-Up, which was a second attempt at the playset. It features more rounded shapes using new pieces. It also looks more robotic and articulated compared to the first one.

Pros and Cons of the LEGO Hulkbuster Set 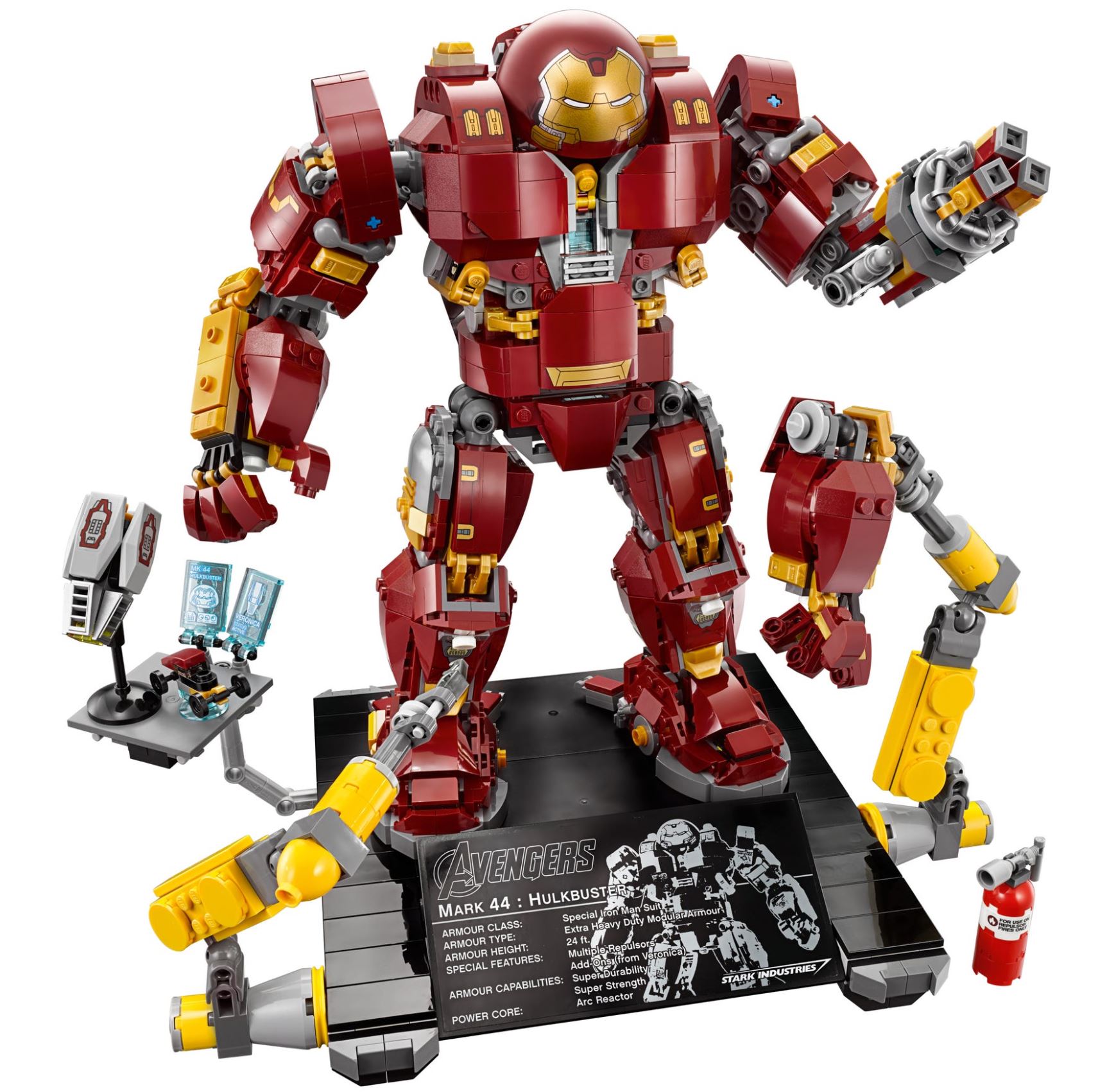 Here’s a quick list of the pros and cons of the LEGO Hulkbuster set. I’ll safely say that the benefits outweigh the downsides.

Features of the LEGO Hulkbuster Set 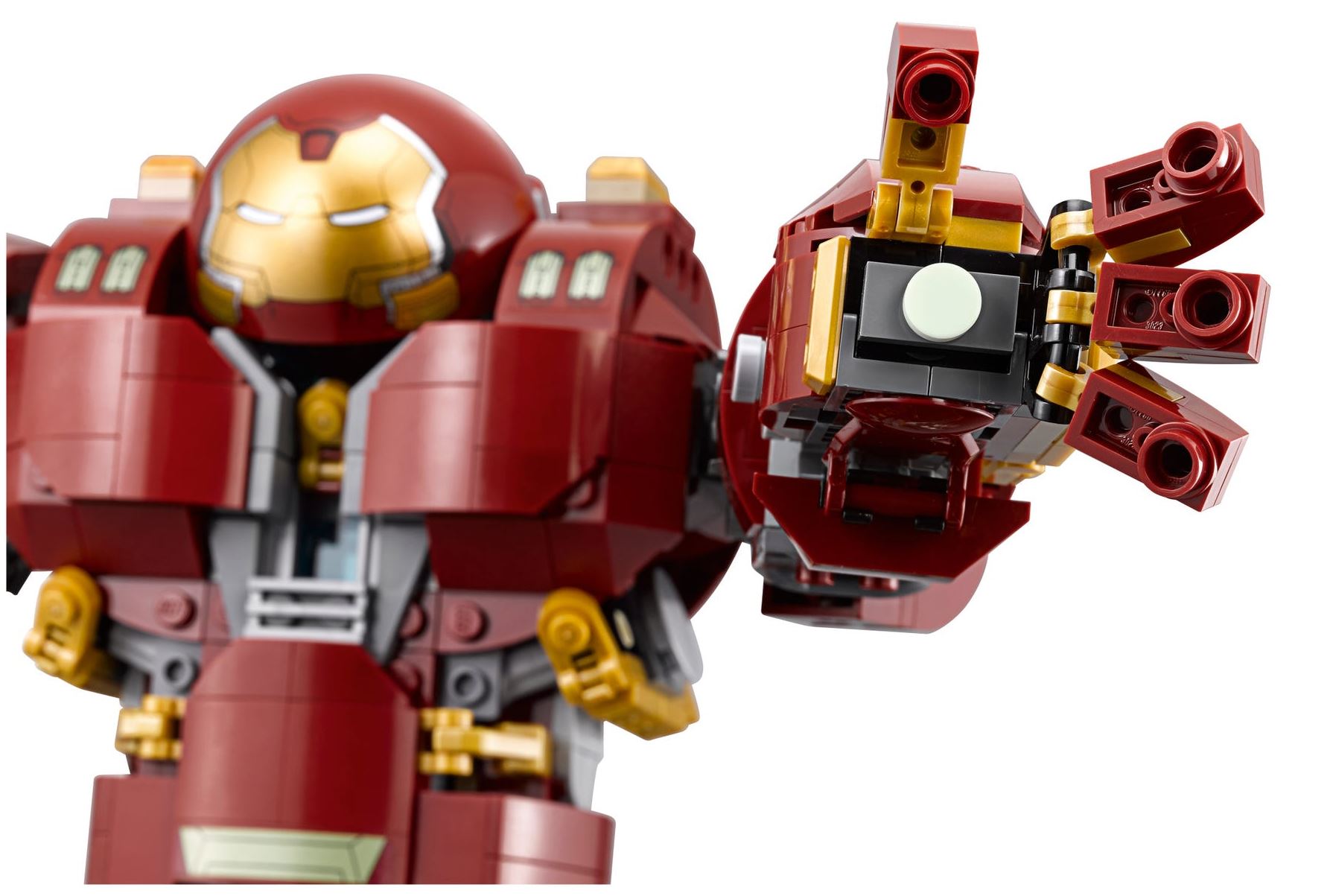 Let’s dive deeper into the notable features of this Age of Ultron-inspired set.

The Hulkbuster set comes with nine numbered bags inside the oversized box and an un-numbered bag for the base. You’ll also see a 183-page instruction booklet and a sticker sheet with 20 stickers.

Several models are included in the playset, but Veronica was the figure that immediately caught my attention. It’s Tony Starks’s beloved satellite service module that deploys the armor.

You’ll also see Tony Stark’s hot rod, which looks like it’s not supposed to be a part of the package. It feels out of place because of the unrealistic design. Plus, it’s much smaller than the fire extinguisher model. 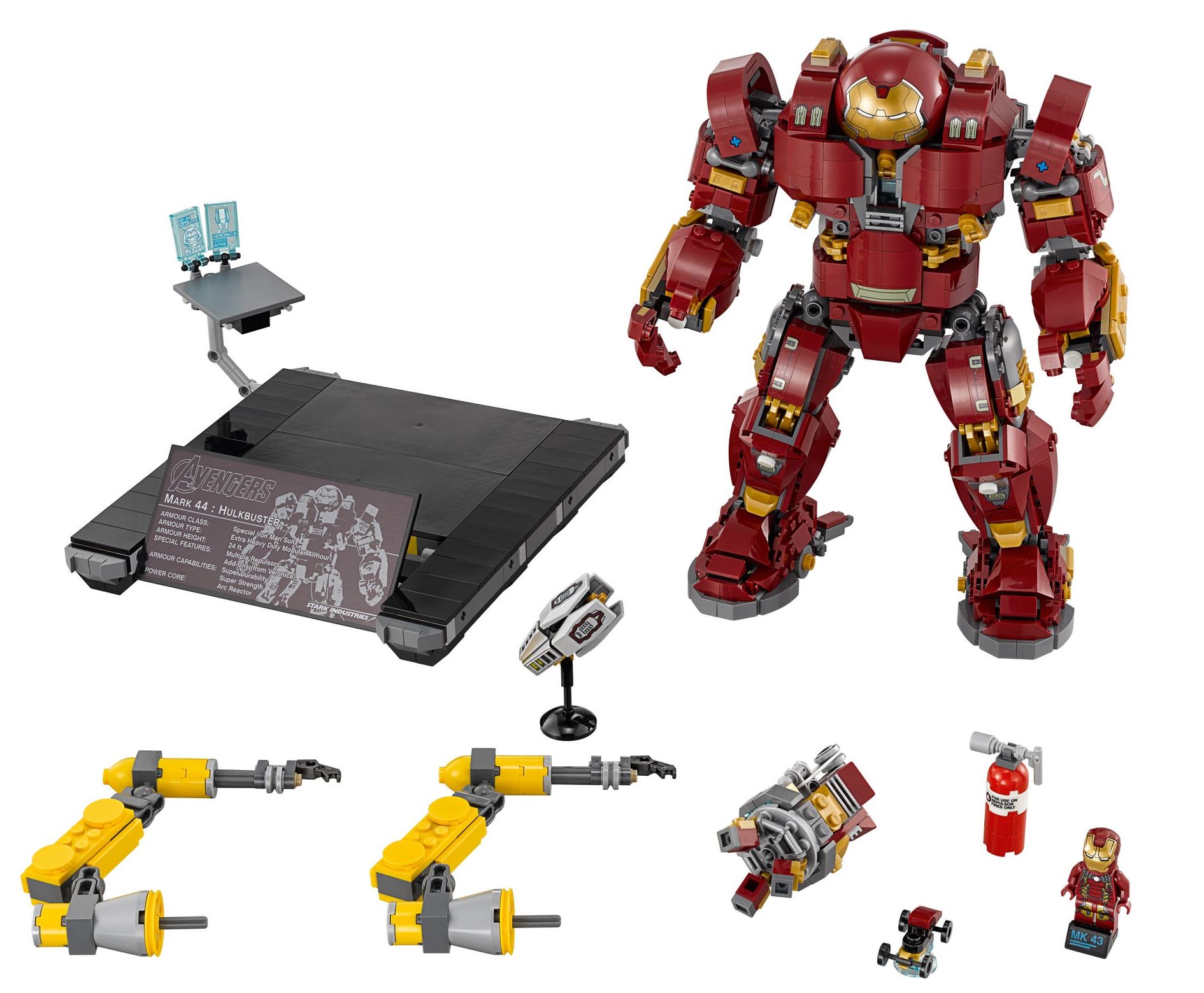 The LEGO Hulkbuster Set contains 1363 pieces, including the exclusive Iron Man Minifigure with the Mark 43 armor. The midget version of the suit from Avengers: Age of Ultron also appears in three other toy sets, like the 76031 Hulkbuster Smash.

But this Iron Man figure is unique because it’s inspired by the suit design that was already integrated with the Hulkbuster suit. I’m impressed with the fresh wiring prints on the torso and legs, which other sets don’t have.

The faceplate is accurate, considering the movie also features a metallic gold with black streaks. You can open it to reveal a clear Tony Stark head.

1363 pieces make up the stunning mechanical detail on each part of Hulkbuster. Smaller pieces adorn the arms and legs. The completed design also features an alternative jackhammer, which resembles the scene in the movie where Iron Man subdues the Hulk.

The LEGO pieces from this package have a dark red and pearl gold theme. This Hulkbuster Set is the only set that contains Hulkbuster’s large domed head in print and the following in dark red:

You’ll also find other specialty pieces inside the box, including dark red slide shoes, jumper plates, and bowed curved plates with cuts. A 10258 London Bus is also present, and it’s similar to the 76104 Hulbuster Smash-Up.

If you’re looking for rare TECHNIC shell pieces like the one in the Veronica model, this set also has it. Some 2018 pieces like the light brick and 1×2 plate with round edges are also here.

The Ultron Edition of The Hulkbuster costs $119.99, which is reasonable for avid Marvel Cinematic Universe fans. Considering the price per element, the product is around 14c per piece. That’s much cheaper than other sets.

Non-Marvel fans might also give in to this set because of the unique dark red parts, tiles, and SNOT elements. Modify it however you want to create your construction.

But what makes this building block set worth the price is the detailed torso. Push the button at the back, and the light brick will activate on its chest, referencing the primary Arc Reactor from the movie.

The orange glow indeed looks like it will give the armored suit some power! Add that to the six glow-in-the-dark 1×1 round tiles at the back of the torso.

It’s unlikely for the Hulkbuster to be on sale anytime soon. But I’m confident there will be a price increase after the product retirement.

What Age is it Best For? 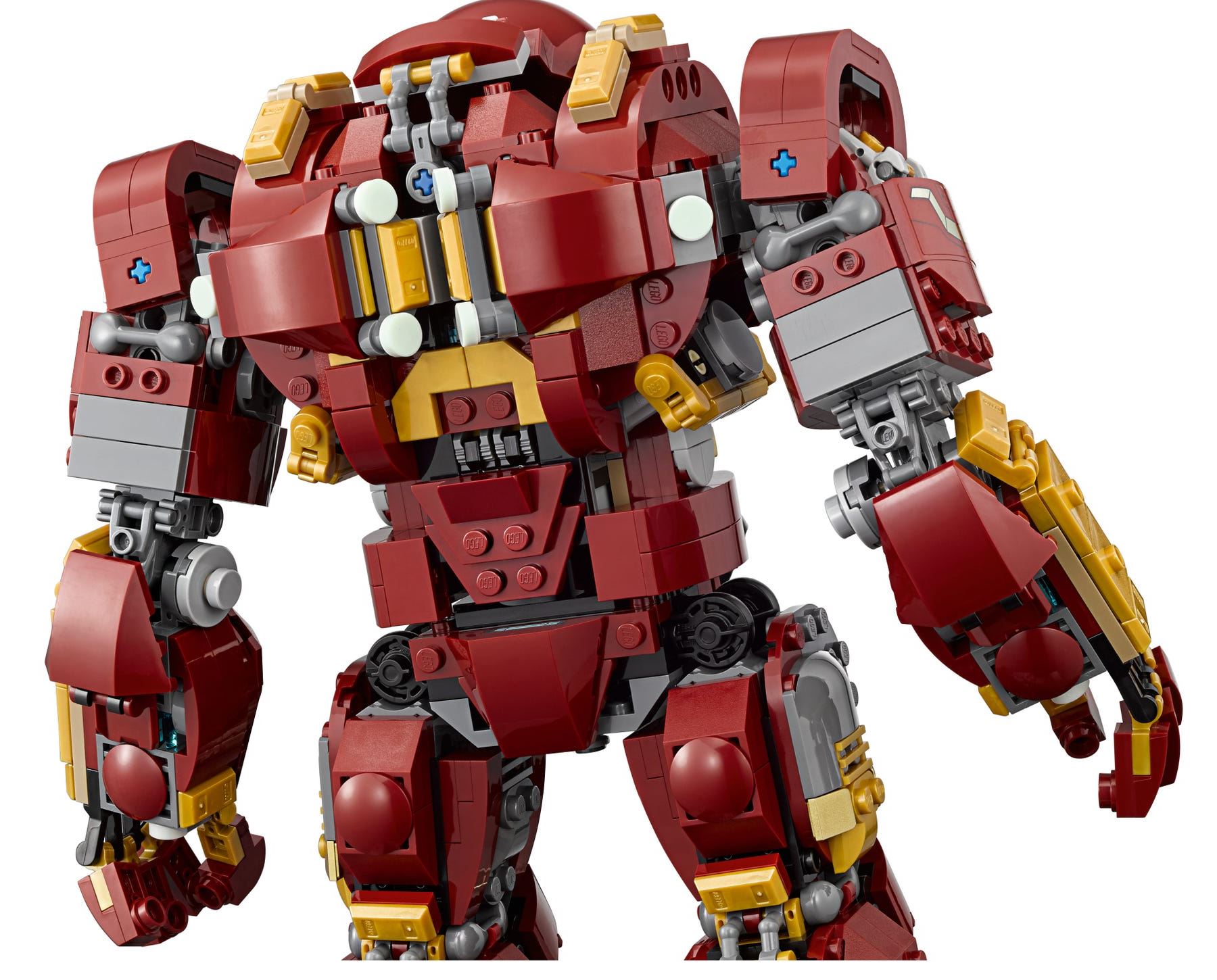 LEGO rates the Marvel Hulkbuster Ultron Edition as suitable for kids 14 years old and above.

Younger kids may need the assistance of an adult in building this detailed model. The set includes complex pieces like the axle, which allows the lower leg and thigh to fit.

Mechanical details appear on all four limbs plus the back of the Hulkbuster. The builder has to use ball joints and rubber types to create the feet, ensuring it stays still.

How Long Does It Take to Assemble?

Pro LEGO builders take approximately two hours to finish the Hulkbuster Ultron edition. It can take a shorter time if you build it with a companion. But beginners may have to allow at least three hours for this project.

Make sure to follow the 183-page instruction manual for a fuss-free build. You can also look for online videos of people building the Hulkbuster for a guide. 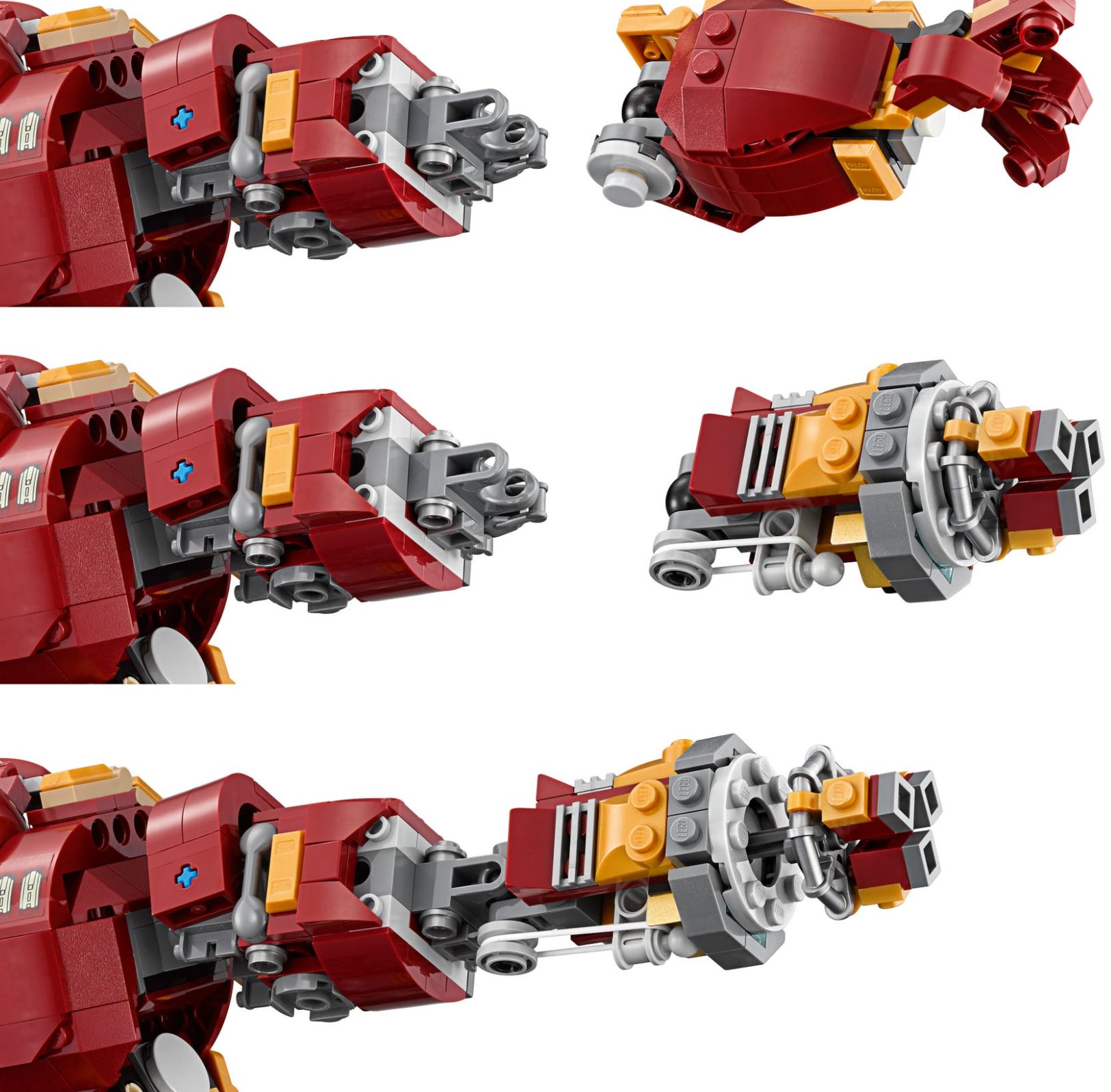 A significant feature of the Hulkbuster Ultron edition is its sophisticated black display base with yellow arms. It’s purely for aesthetic purposes because it doesn’t offer structural support to the model.

An information plaque is also present, folding up and down in front to show the armor class, type, and height. Some find it unnecessary, but I think it makes the Hulkbuster better for decoration.

The arms, shoulders, and torso of the Hulkbuster are posable in many ways. You can rotate the hips and move the legs and ankles sideways. Unfortunately, the forward and backward motions are stiff because of the click-ball joints. There are also no knee joints for dynamic poses.

Places You Can Buy the LEGO HulkBuster Age of Ultron Set

You can find this toy set from any of the following retail stores:

Alternatives to the LEGO Hulkbuster

If the LEGO Hulkbuster Ultron Edition isn’t your cup of tea, check out these alternative playsets. 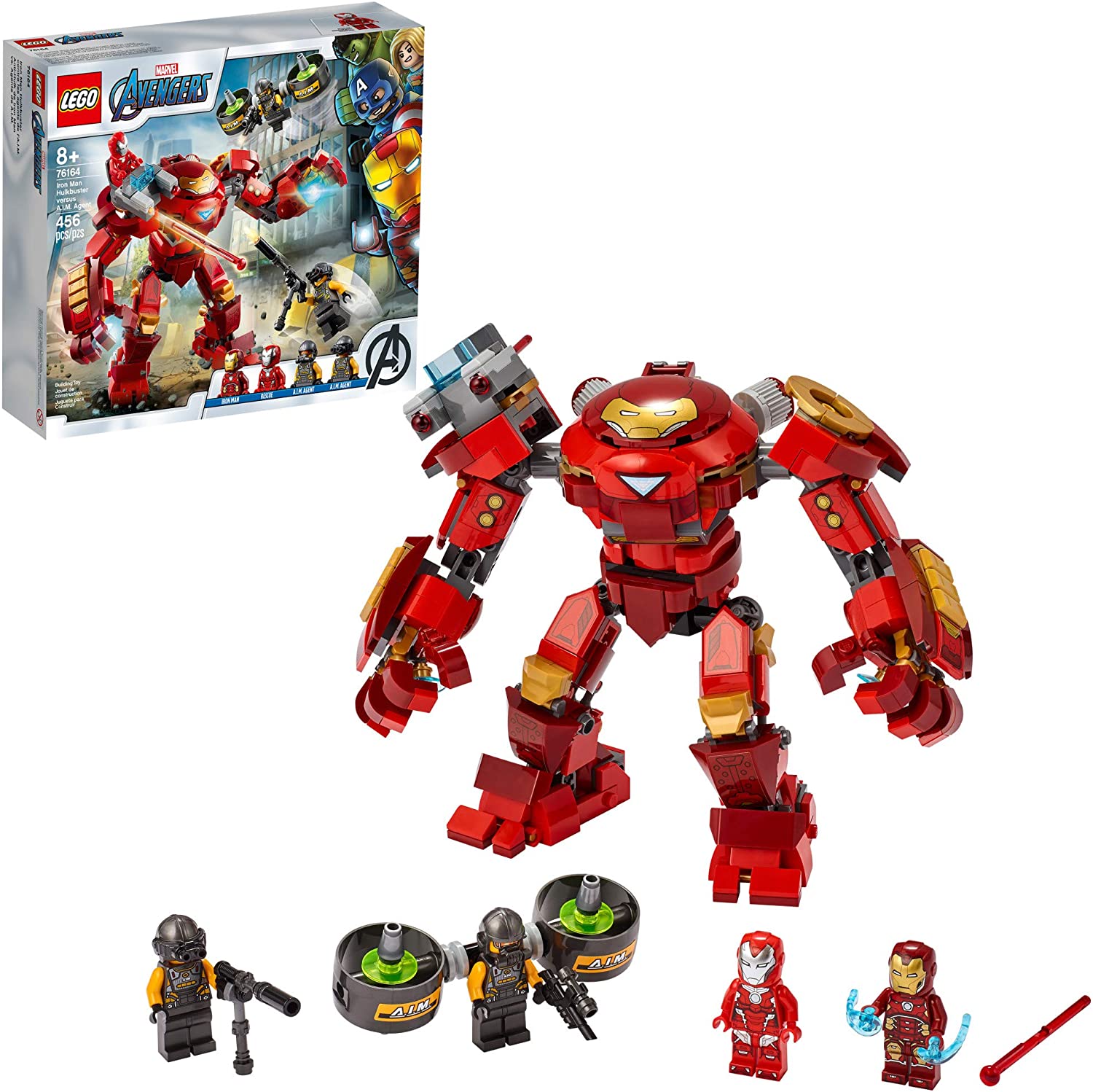 This Iron Man Hulkbuster is more suitable for kids because it’s easier to build with a few pieces. It includes 4 Minifigures with cool weapons and a jet pack, setting the scene for a battle.

Hulkbuster measures 6 inches, which is shorter than the Ultron version but still worthy of imaginative play. You can also move all four limbs for more action while the Iron Man Minifigure sits inside the cockpit. 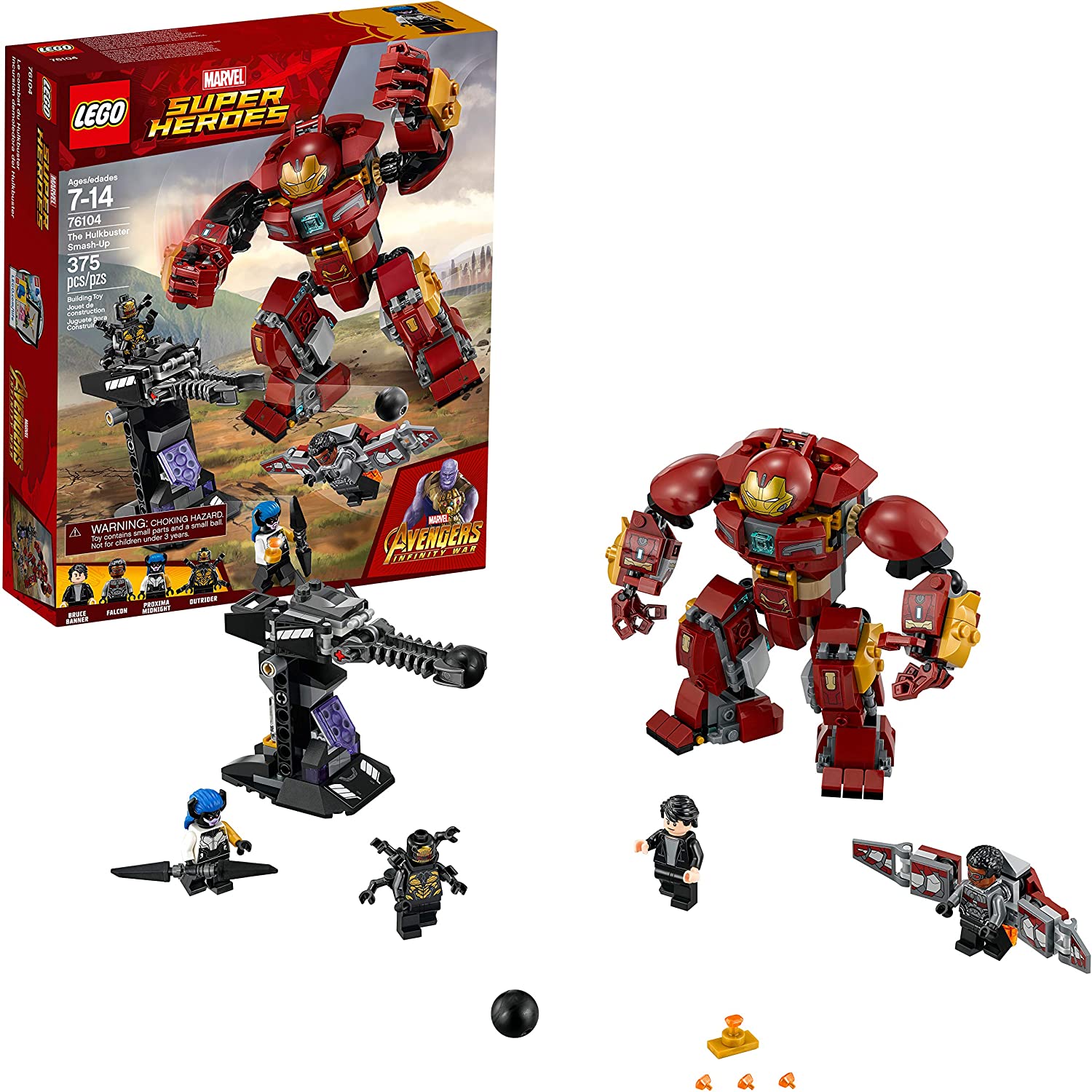 The Hulkbuster Smash-Up is the second version of the Hulkbuster Building Kit, which kids seven and above can enjoy. It includes a Bruce Banner, Falcon, Proxima Midnight, and an Outrider figure.

The Smash-Up has rounded edges and a wheel you can turn on to strike the gun turret. You can also perform an imaginative play on the Outrider as it fires the ball-shooting gun. 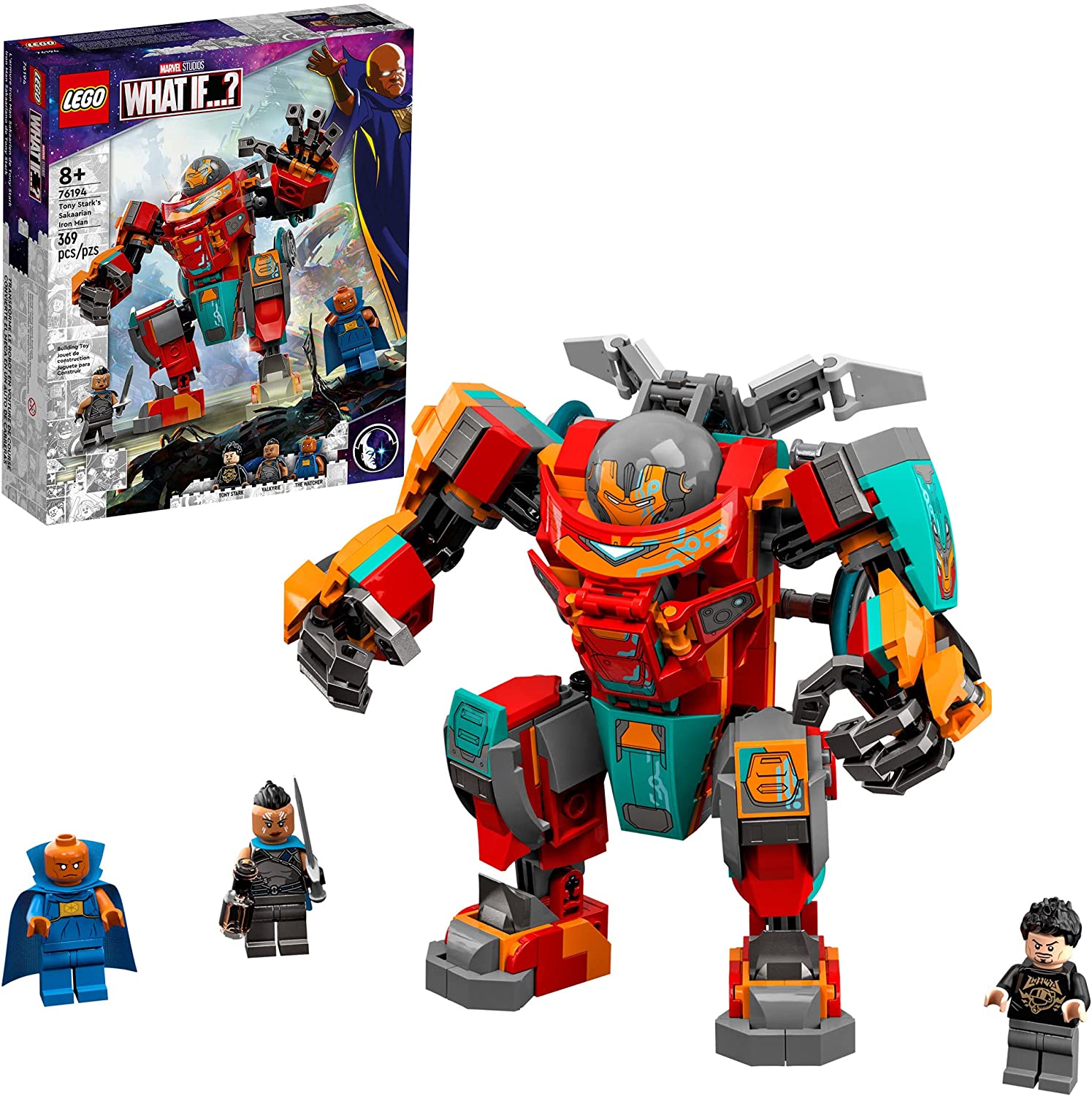 Opt for the Sakaarian Iron Man set if you’re looking for something with a cartoonish edge to add to your collection.

The building kit references the What If…? TV series, including Tony Stark, Valkyrie, and The Watcher Minifigures. PS: If you haven’t seen the series I highly recommend you go now and catch it on Disney+. Sooooo good! There’s also a buildable mech you can turn into a vehicle.

Question: Which LEGO Hulkbuster is Best?

Answer: The Hulkbuster: Ultron Edition is the best Hulkbuster edition. It enjoys the UCS or Ultimate Collectors Series Hulkbuster label.

Question: How Many LEGO Hulkbuster Sets are There?

Answer: There are three versions of the LEGO Hulkbuster Set, with the Ultron Edition being the latest.

2018 saw the jaw-dropping release of the Hulkbuster: Ultron Edition. It’s more mechanically detailed than its earlier versions, plus the glow-in-the-dark pieces are attractive.

LEGO could use some improvements on the proportions and poseability. But overall, I would recommend it to both LEGO and MCU collectors.

Would you buy the LEGO Hulkbuster: Ultron Building Kit? Share with me in the comments! And if you want more great breakdowns of LEGO products, check out our review of the LEGO Batmobile.