LEGO Star Wars theme had over a dozen subthemes in the last twenty years, but very few of these subthemes were as popular as the Helmets collection. Some of the most recognizable characters from the Star Wars universe served as an inspiration for the best LEGO Star Wars Helmets.

The Helmets collection contains just eight models so far, but this number is likely to increase in the next couple of years. All sets from this collection are designed for adult LEGO fans, and they don’t contain Minifigures or accessories that come with Star Wars playsets.

In this article, I’ll walk you through all the steps you need to take to find the best LEGO Star Wars Helmet and supply you with information about different models from this collection.

Choosing a LEGO Star Wars Helmet set comes down to personal preference. However, I recommend getting one of the early models like Boba Fett Helmet 75277 or Stormtrooper Helmet 75276 before LEGO retires them and their price skyrockets.

At a Glance – The 8 Best LEGO Star Wars Helmets

LEGO released just eight sets within the Helmets collection since 2020, adding a few sets to the collection every year. Despite slight piece count variations, these build-to-display sets have identical features.

I didn’t use other selection parameters such as the release date or recommended age group since all sets in this collection are still in production, and they’re made for experienced LEGO builders. That’s why I decided to include all models from the collection in this article.

What is the Star Wars Helmets Collection?

Darth Vader Bust 75227 and Sith Trooper 77901 limited edition sets were released as a part of LEGO’s 20th Star Wars anniversary celebration and Comic-Con in 2019. These sets served as models for the Star Wars Helmets collection launched in April 2020.

In March 2022, the toymaker published three more sets, including The Mandalorian Helmet 75328 and Dark Trooper Helmet 75343, the first models based on a Star Wars TV series. At this point, there’s no indication that LEGO plans to release more Star Wars Helmet sets this year.

Also, the models published in 2020 will be discontinued by the end of 2022. Please go through our guide to the best LEGO Yoda sets for more information about models featuring this Star Wars character. 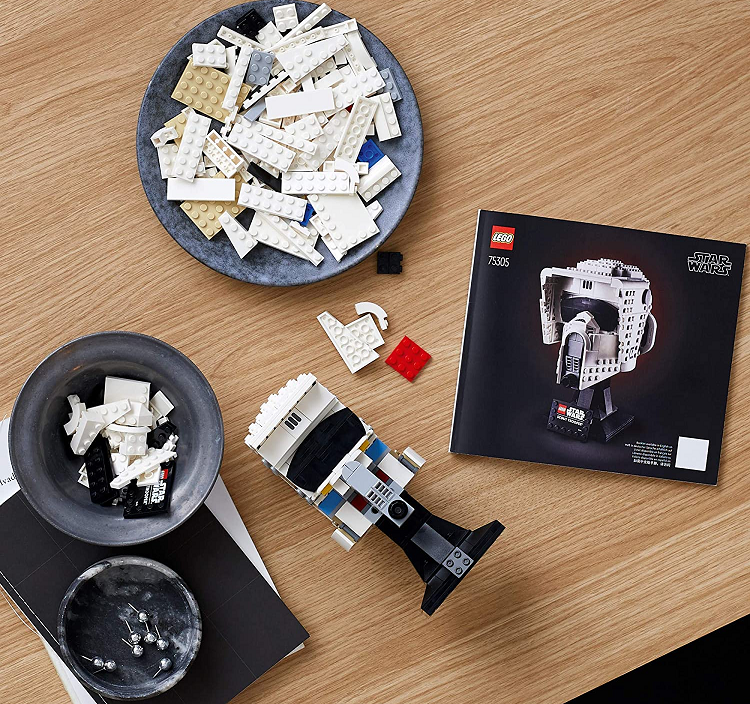 The contents of sets from the Star Wars Helmets collection are almost identical, with the most significant difference being the number of pieces they contain.

With 834 pieces, the Darth Vader Helmet 75304 is the biggest LEGO Star Wars Helmet set, while the Scout Trooper Helmet 75305 has just 471 pieces and is the smallest set in the collection.

However, none of the sets from this collection has more than a thousand pieces. Each model comes with the character’s nameplate, while display stands are also an integral part of these sets. It is worth noting that separating the helmet from the stand isn’t possible.

The dimensions of display models are similar but not identical, and their height varies from 7 to 8.5 inches. Despite a relatively low piece count and modest dimensions, these sets are not easy to assemble.

Check out our guide to the biggest LEGO sets if you’re looking for a model that will challenge your set-building skills.

The collection’s popularity has been on the rise since its introduction to the Star Wars theme two years ago, with fans calling for more sets inspired by helmets worn by different Star Wars characters.

LEGO doesn’t release information about the upcoming models, so it’s impossible to tell how the new additions to this collection will look. The majority of Star Wars Helmet sets are inspired by characters from Star Wars movies.

That’s why LEGO fans hope to see more models based on characters from video games like Star Wars Jedi: Fallen Order or TV series such as Clone Wars or The Mandalorian.

Captain Rex, The Armorer, or Second Sister are among the characters whose helmets might serve as an inspiration for new Star Wars Helmet sets. Some fans wish for sets based on Royal Guard’s and Anakin’s Podracer helmets.

However, there’s no guarantee that LEGO is going to consider any of these ideas. Please read our Trouble on Tatooine review to learn more about this remarkable LEGO Star Wars set.

Complex LEGO sets designed for experienced builders usually have more than a thousand pieces. The piece count of Star Wars Helmet sets can be misleading since most models from this collection have around 700 pieces.

Nonetheless, constructing these sets is time-consuming even with the building instructions, and it may take you hours, to put them together. You should first try building some of the less complex LEGO Star Wars sets before moving on to a model from the Helmets collection.

Please go through our guide to the best LEGO Stormtrooper sets if you’d like to learn more about LEGO sets inspired by Stormtroopers. 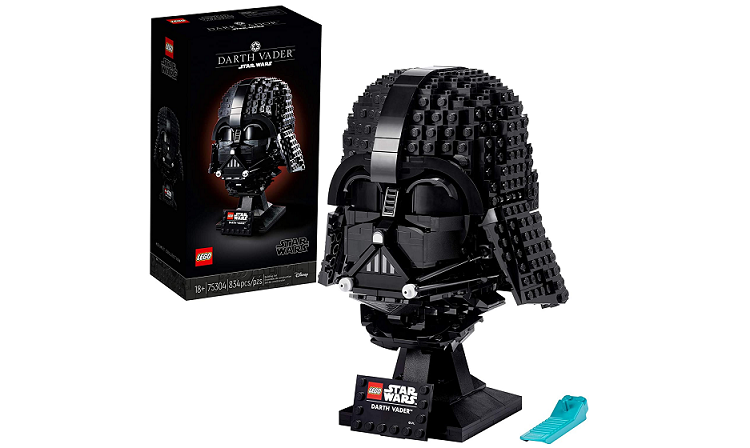 Fans of one of the most beloved villains in cinema history will enjoy building the Darth Vader Helmet 75304 set. This model has more pieces than other sets from the Star Wars Helmet collection, and it is also the collection’s most expensive set.

The helmet contains the Vader’s life-support system and other details that contribute to its realism. The display model is 8 inches tall, and it has a plaque containing the character’s name. The building instructions containing each step of the assembly process are included in the set. 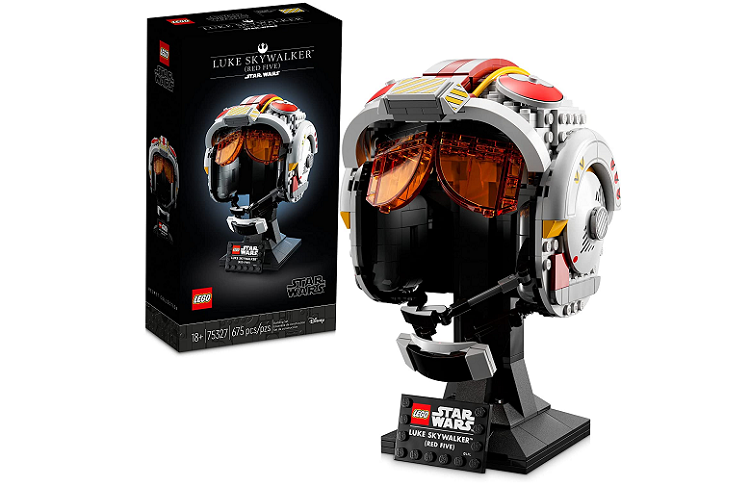 The model was released in March 2022, and early fan reports indicate that it’s one of the best sets released within the Star Wars Helmets collection. Its features are identical to those you can find in other sets from this collection.

Constructing this set is a challenge even for a seasoned LEGO builder since some steps of the assembly process are hard to complete. 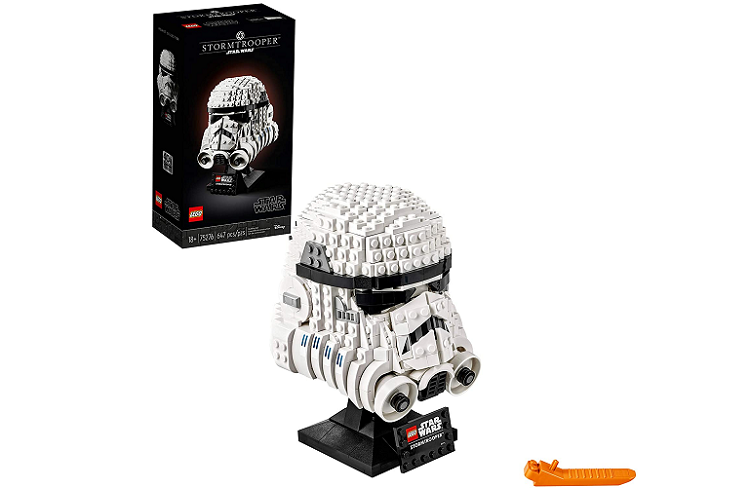 Two years after it was published, the Stormtrooper Helmet 75276 is still among the best-selling models in the Star Wars Helmet collection. However, this set may not stay on the market for much longer, and it is already sold out on the LEGO website.

The display model recreates the iconic look of white Stormtrooper helmets, and it includes details such as a voice coder, aerators, or brow trim. The set has 647 pieces, and assembling it takes several hours. 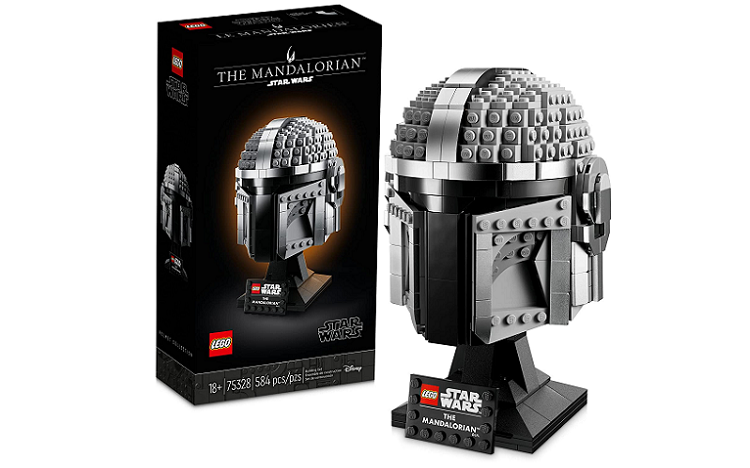 The Mandalorian Helmet 75328 is one of the rare sets in the collection that isn’t inspired by the characters from the original Star Wars trilogy. Instead, it allows you to build a replica of Din Djarin’s helmet from The Mandalorian TV series composed of light and dark gray bricks.

The helmet also contains drum-lacquered elements designed to replicate the properties of The Mandalorian’s beskar armor. Like all other LEGO Star Wars Helmet sets, this model comes with a nameplate and a display stand. 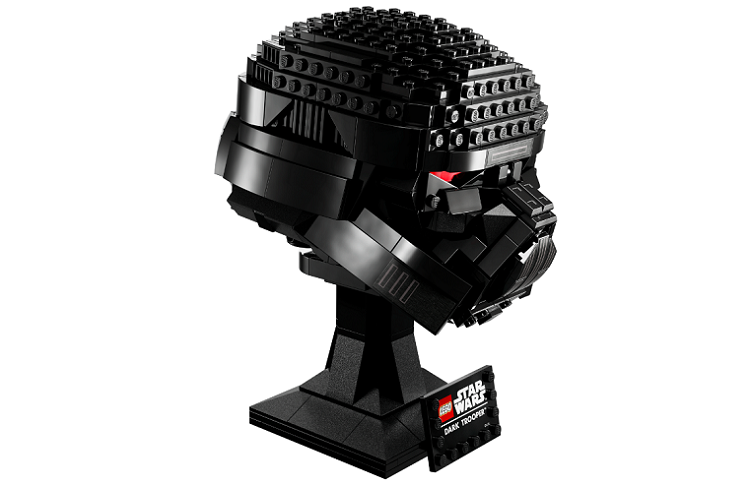 The availability of the Dark Trooper Helmet 75343 set in LEGO-certified stores is still somewhat limited. This set was released in March 2022, so some online retailers may not have it in stock yet. Helmets worn by Dark Troopers in the second season of The Mandalorian TV show served as inspiration for this set.

The distinctive red eyes are created from translucent elements, while the rest of the helmet is composed of black bricks and elements. The helmet’s dimensions are similar to those of other models from this collection.

The replica of the scout trooper helmet has unique details like the voice coder or visor. Although building this set requires some previous experience, young LEGO fans can assemble it relatively quickly. The construction process can get repetitive, especially while constructing the helmet’s upper front segment. 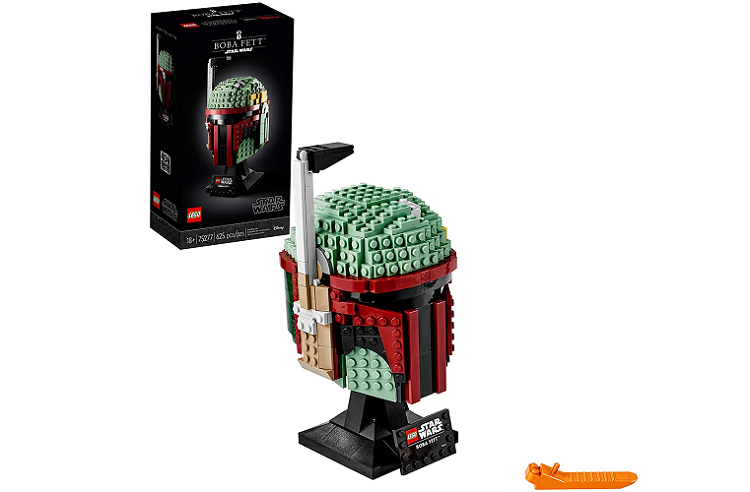 LEGO will most likely retire the Boba Fett Helmet 75277 set by the end of 2022, and you should get it before its market value doubles. The helmet featured in this set is based on Boba Fett’s helmet in the original trilogy and not the one used in The Mandalorian TV show.

An adjustable rangefinder and a visor are among the details that contribute to the helmet’s realism. The assembled model is stable, and it won’t come apart when you lift it. 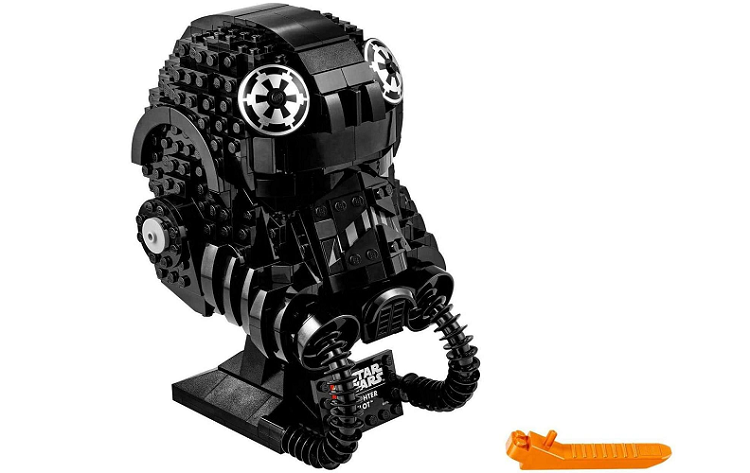 The Tie Fighter Pilot 75274 set is out of stock on the LEGO website, and there’s no information regarding when or if it’s going to be back in stock. This set was released in 2020, so it wouldn’t be too surprising if LEGO discontinues it in the near future.

As a result, this model is much more expensive in e-stores than other sets from the Star Wars Helmets collection. The replica of the Imperial Starfighter pilot’s helmet contains more than 700 pieces, and it is seven inches tall.

Answer: LEGO released three new Star Wars Helmet sets in March 2022, and it would be surprising if more models were added to this collection before 2023.

Question: Where Can I Find Spare Parts for LEGO Star Wars Helmets?

Answer: The easiest way to get replacement pieces for these sets is to order them from the manufacturer’s website.

Question: How long does it take to build a LEGO Star Wars Helmet?

Answer: The length of the assembly process depends on the model, and you may need between one and five hours to construct a LEGO Star Wars Helmet.

Answer: Yes, nearly all sets from this collection feature stickers.

My Verdict: Deciding which LEGO Star Wars Helmet Set is the Best

The Star Wars Helmets collection is just two years old, and it contains only eight sets. However, each model is a real treat for a Star Wars fan who enjoys a challenging set-building experience.

Even though you won’t have a lot of options while choosing the best LEGO Star Wars Helmet, you can hardly go wrong with whichever option you choose.

I recommend getting one of the early models like the Stormtrooper Helmet 75276 or the Boba Fett Helmet 75277 if you’d like to start collecting these sets before LEGO retires them and their price increases.

Consider buying the Darth Vader Helmet 75304 if you’re looking for a LEGO set that will test your set-building skills. Which LEGO Star Wars Helmet are you going to choose? Let me know in the comments or continue reading our guide to the best LEGO Marvel sets to learn more about this LEGO theme.