More than four decades after his first appearance in the franchise, Boba Fett is one of the most popular Star Wars characters. As a result, the best LEGO Boba Fett sets are still in high demand two decades after LEGO published its first set inspired by this silent bounty hunter.

The company has released more than twenty Boba Fett sets since the turn of the century, but most of these models are discontinued, and currently, only three active sets in the Star Wars theme are based on this character.

In this article, I’ll walk you through the process of choosing the best LEGO Boba Fett set, and I’ll recommend some of the most popular models the company released in the last few years.

Our guide to the best LEGO lightsaber sets can help you learn more about LEGO sets inspired by Yoda’s or Luke Skywalker’s lightsabers.

I recommend the Boba Fett’s Throne Room 75326 set because young LEGO fans can use it to recreate their favorite scenes from The Book of Boba Fett TV series. The Slave I – 20th Anniversary Edition 75243 is a must-have model for collectors of LEGO Star Wars sets.

At a Glance – The 10 Best LEGO Boba Fett Sets 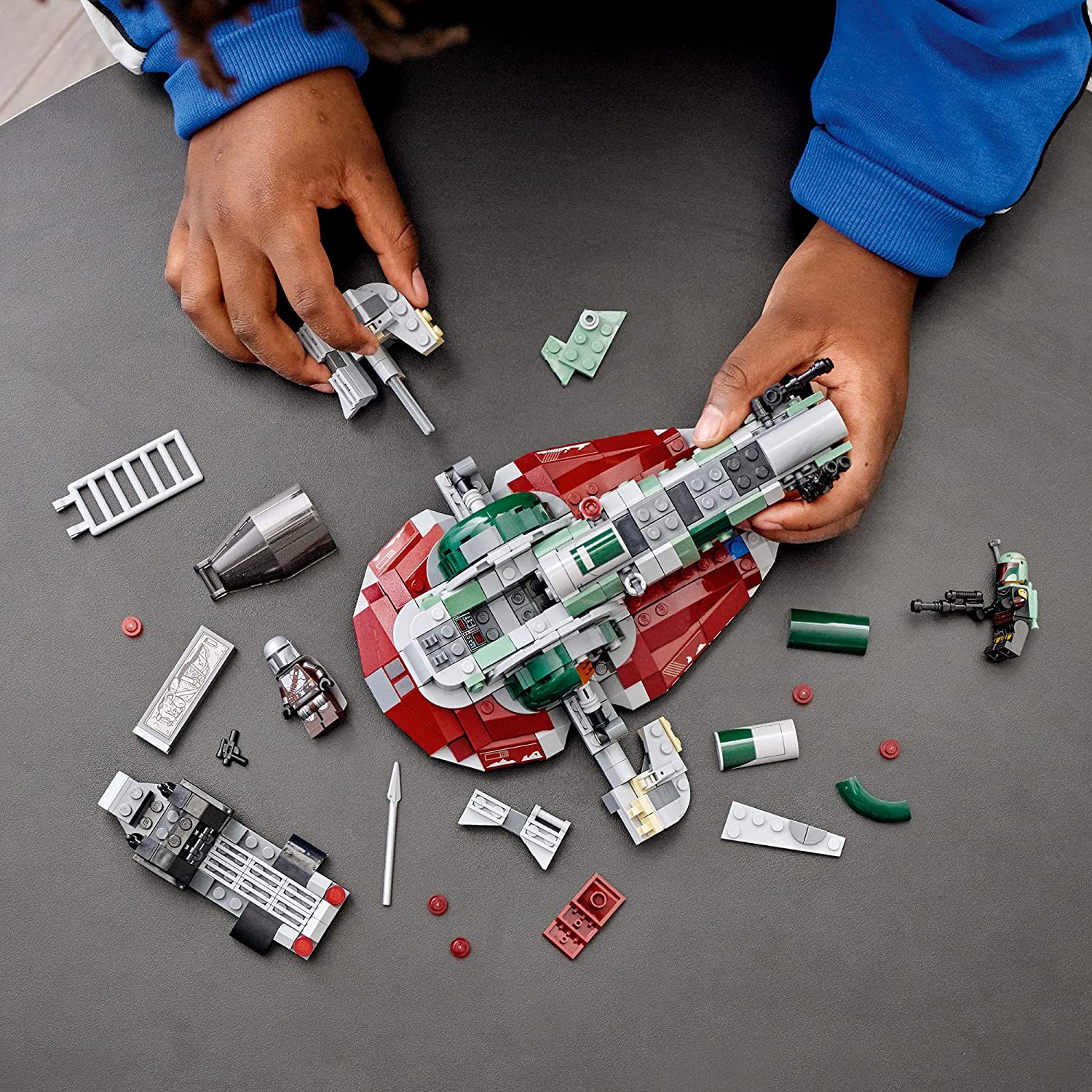 The Mandalorian and The Book of Boba Fett TV series have reinstated Boba Fett as one of the central characters in the Star Wars universe. Consequently, this character is featured frequently in Star Wars sets LEGO published in the last few years.

I used a variety of parameters to shortlist the models I included in the final selection of the best Boba Fett sets. Here are some of the key criteria that helped me choose the sets for this article.

Please read our Trouble on Tatooine review for more information about this set.

Who is Boba Fett? 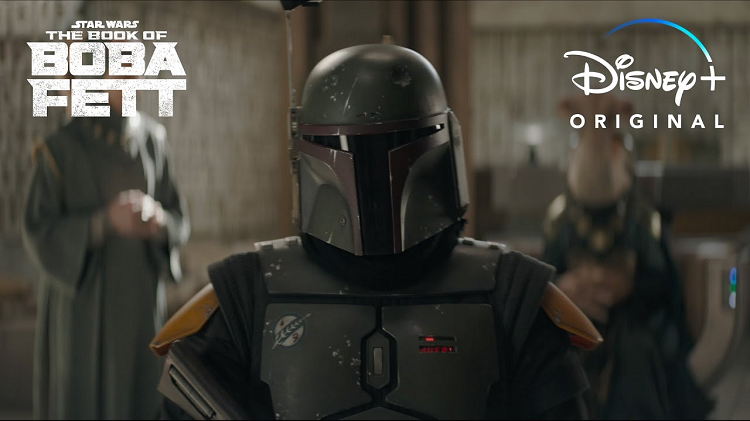 Boba Fett made its first appearance in the Star Wars Holiday Special that aired on CBS in 1978, a little over a year after the premiere of Episode IV: A New Hope. He was also one of the key antagonists in The Empire Strikes Back and Return of the Jedi movies of the original trilogy.

This character appears as a villain in The Attack of the Clones movie of the prequel trilogy. However, Droids, The Clone Wars, The Mandalorian, The Bad Batch, Visions, and The Book of Boba Fett TV shows portray him positively.

Boba Fett is a bounty hunter, and he’s a genetic clone of his father, Jango Fett, who’s also a Mandalorian bounty hunter. Check out our guide to the best LEGO Yoda sets to learn more about models based on this Star Wars character.

This character appears in LEGO sets released within Episode II, Episode V, Episode VI, and The Mandalorian subthemes. The Slave I 7144, the first set inspired by Boba Fett and his spaceship, was released within the Episode V subtheme a year after LEGO introduced the Star Wars theme.

The toymaker released multiple versions of this set over the next two decades, but the toy’s design hasn’t changed significantly through the years. In fact, most sets inspired by this character have similar titles and characteristics.

The biggest difference between Boba Fett sets published within different subthemes are the Star Wars characters they feature.

Our guide to the best LEGO Minifigures can help you discover some of the most valuable Minifigures of Star Wars characters. 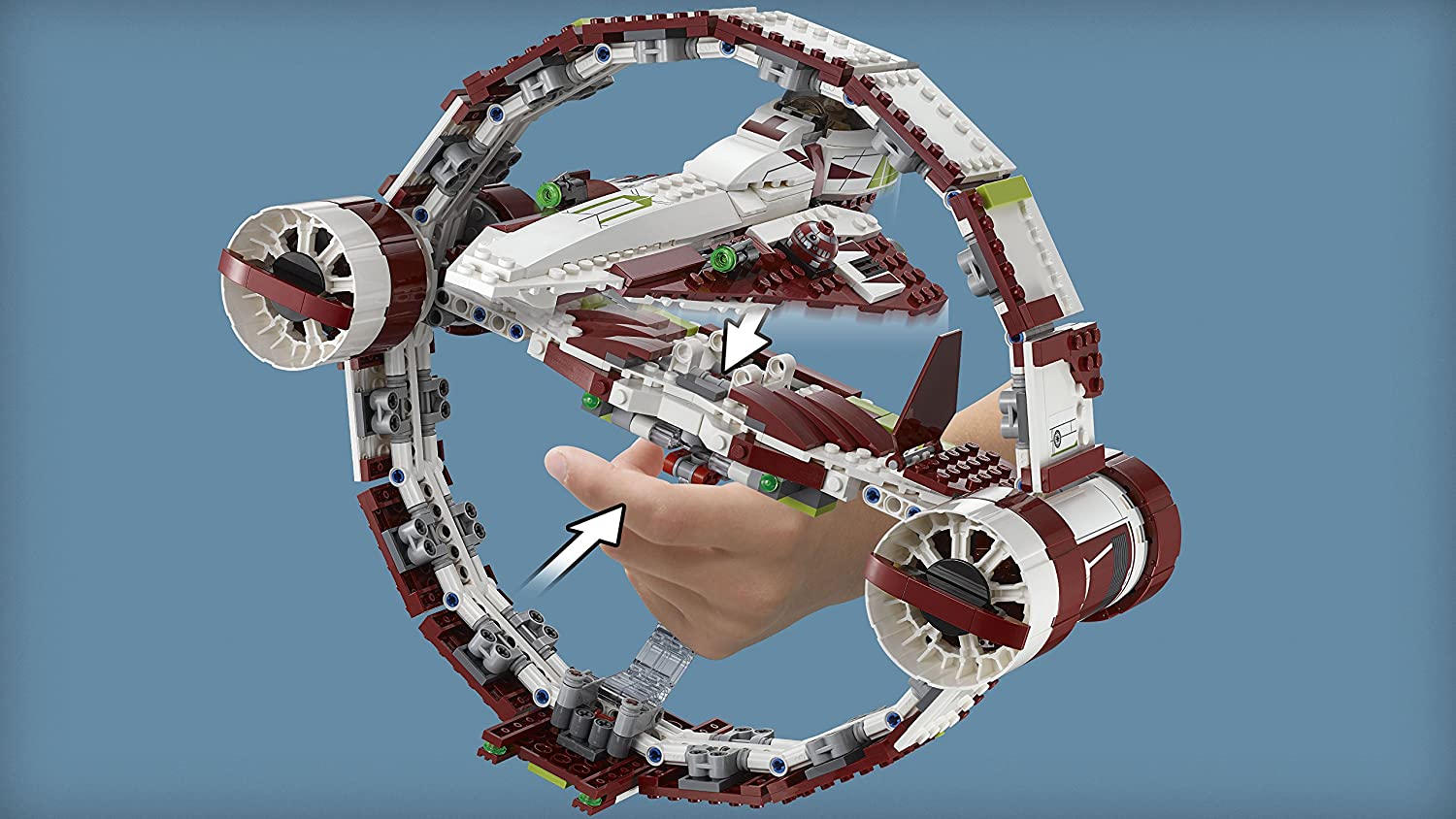 The average lifespan of Boba Fett sets in around twenty months, so most models based on this character LEGO released since the turn of the century are retired. Some of these sets are still available on the secondary market, but finding models published in the early 2000s can be difficult.

Models like Jabba’s Prize 4476, released in 2003, or Slave I 6209 from 2006 are either impossible to find or incredibly expensive. Let’s take a look at several relatively affordable retired LEGO Boba Fett sets.

Even though they’re designed for young LEGO fans with previous set-building experience, these models are only a good option for collectors who don’t mind the hefty price tag. You should also keep in mind that finding replacement pieces for these sets is often a challenging task.

Please browse through our guide to the best LEGO stormtrooper sets if you’d like to find out more about sets featuring imperial soldiers. 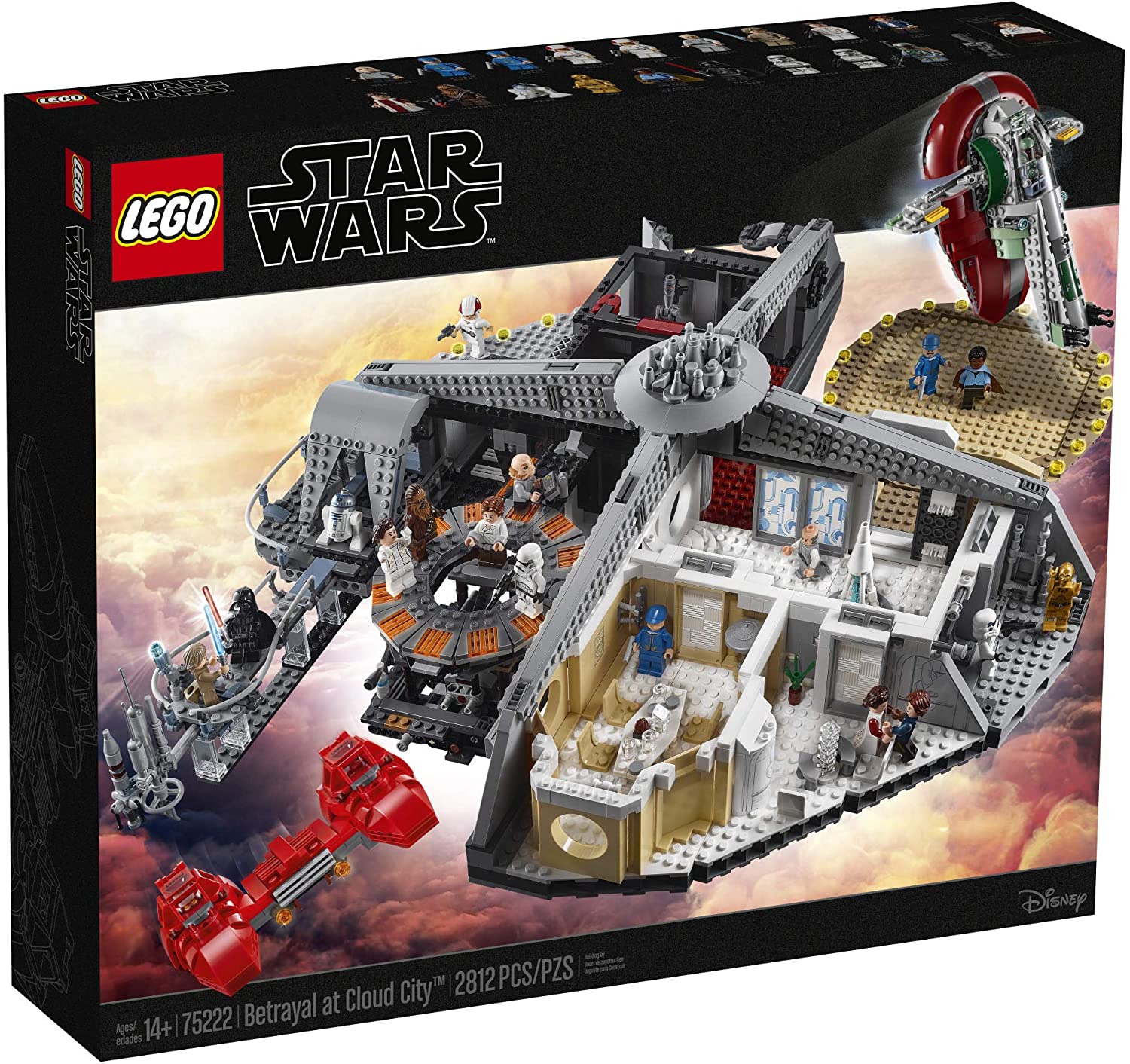 Moreover, some models are designed for adults and experienced LEGO builders even though they have fewer than a thousand pieces. LEGO also released several high piece count models over the years, and the Btrayal at Cloud City 75222, published in 2018, is the biggest LEGO set inspired by Boba Fett.

Blasters, lightsabers, and similar weapons are the most common types of accessories in these sets, but some models also feature drinks, carbonite bricks, and other elements.

Please go through our 1,500 piece LEGO sets guide to discover some of the best high-piece count models in different LEGO themes.

Even though it is a recent Star Wars set inspired by this bounty hunter, Boba Fett’s Throne Room 75326 is already one of the most popular models in this LEGO theme. The set is based on the events depicted in The Book of Boba Fett series, and it features seven characters from this TV show.

So besides the Boba Fett Minifigure, you’ll also get Bib Fortuna, Fennec Shand, Weequay Guard, Quarren, Theelin Dancer, and Gamorrean Guard Minifigures if you opt for this set. 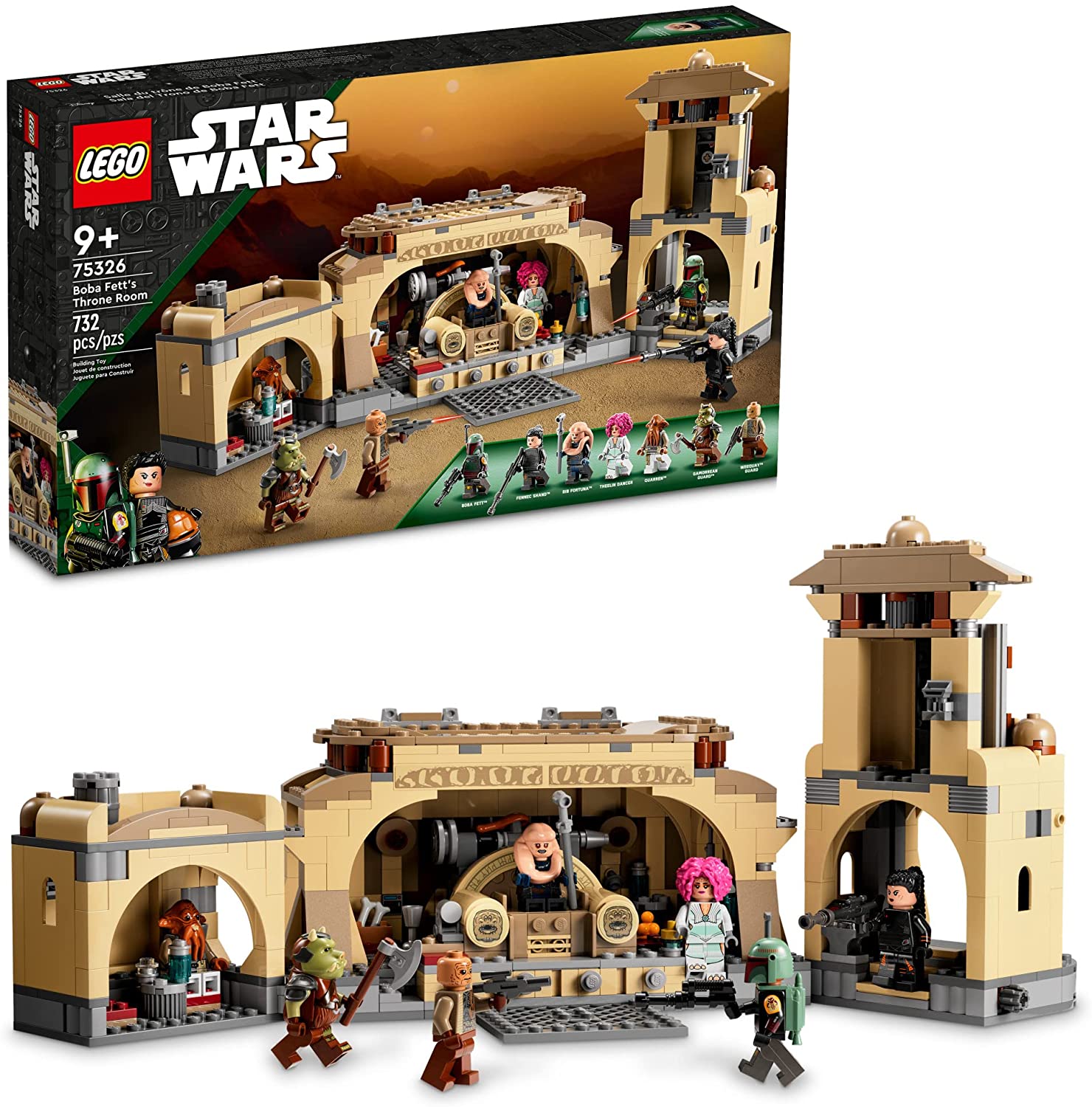 An affordable set like Boba Fett’s Starship 75312 can be an excellent choice for young fans of The Mandalorian TV series. The starship toy has rotating wings, a pair of stud shooters, and two non-shooting blaster cannons.

It also features a handle that allows children to ‘fly’ with the Boba Fett Minifigure behind the controls in the cockpit. The transporter toy enables The Mandalorian and Boba Fett to return to the Slave I ship after they complete their missions. 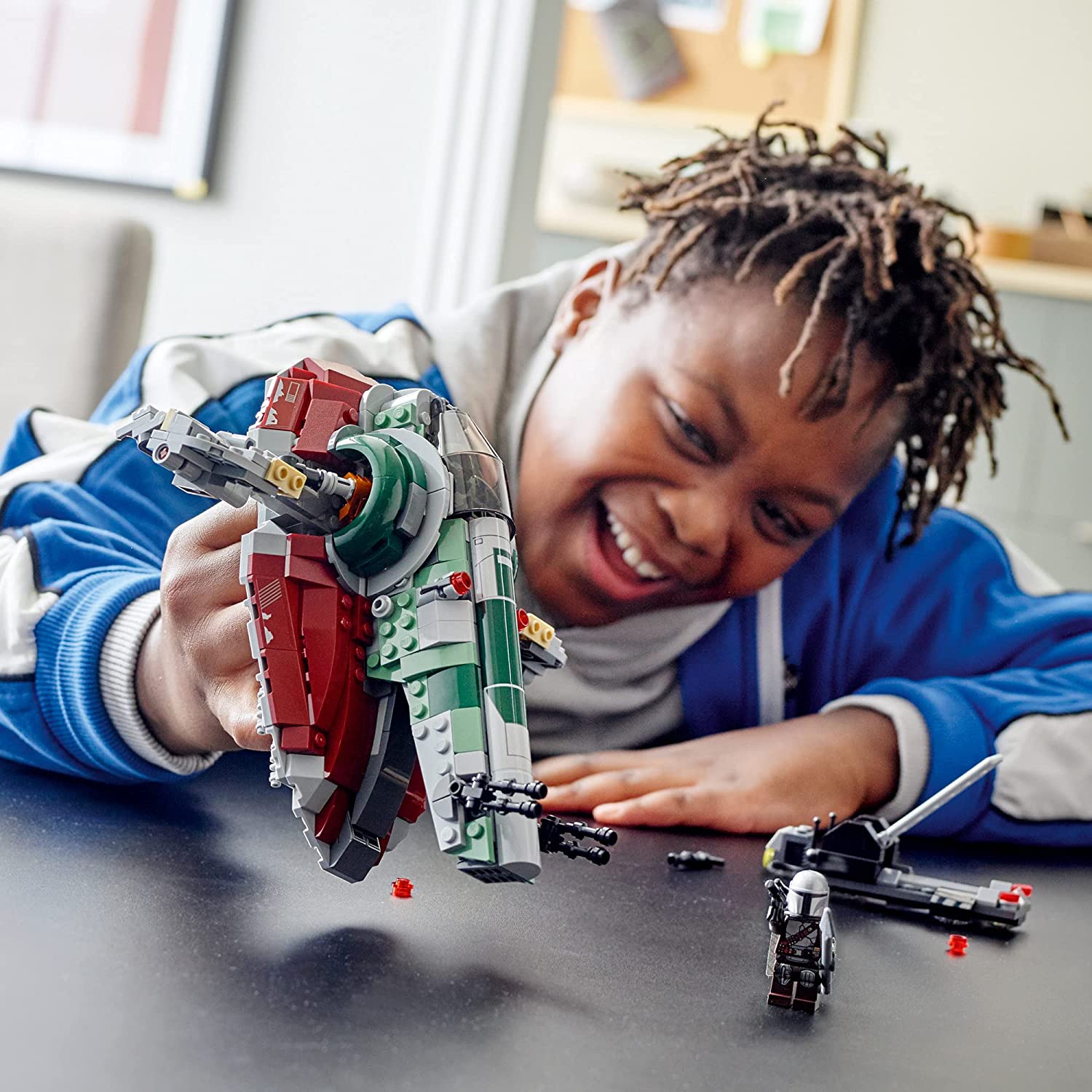 You should consider getting the Boba Fett Helmet 75277 if you’re searching for a set that will test your set-building abilities. You can combine it with the Mandalorian Helmet 75328 or Darth Vader Helmet 75304 to create a collection of Star Wars-themed display models.

A fully assembled Boba Fett helmet is 8 inches tall and 5.5 inches wide, so finding space on your LEGO display shelf shouldn’t be difficult. This set features a display base for the helmet and a plate with the character’s name. 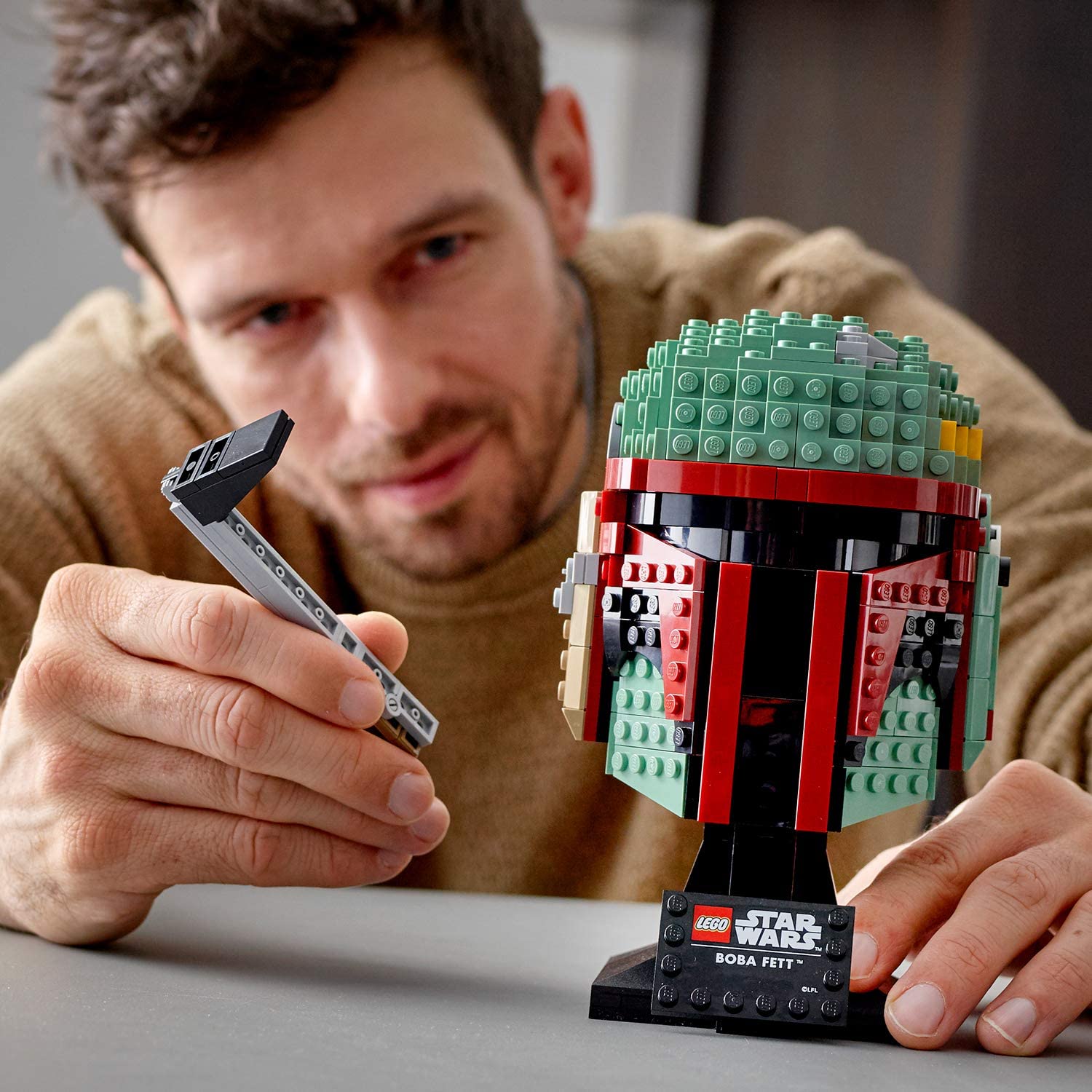 LEGO released the Slave I – 20th Anniversary Edition 75243 in 2019, nearly two decades after publishing the first Boba Fett set that had the same title. However, the new and improved version of the set featured a more detailed model of the character’s spaceship.

The Slave I toy is 12 inches wide and 11 inches long. It has flexible side wings, a carry handle, and cargo room at the back of the ship that can fit the Han Solo in Carbonite element. This set also features a unique Princess Leia Minifigure.

A classic set like the Betrayal at Cloud City 75222 is a valuable addition to any collection of Star Wars sets. Moreover, this is also the biggest set featuring a Boba Fett Minifigure LEGO ever released. Besides the character’s Minifigure, the set also includes the Slave I one spaceship.

The model of the Cloud City has several sections, including the freeze chamber, sensor balcony, and Darth Wader’s dining room. Weapons and various other accessories are included in the set. 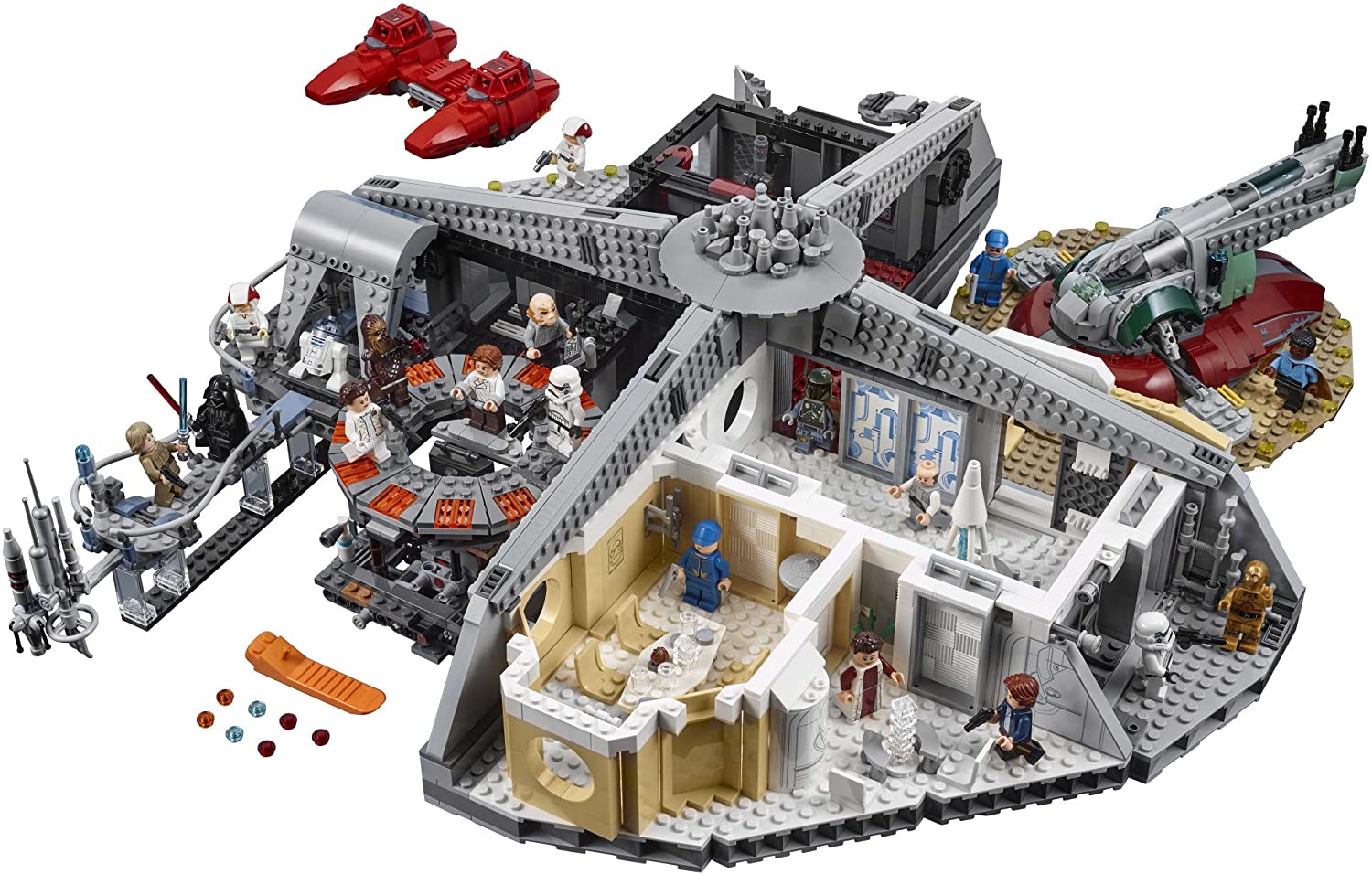 Constructing the Boba Fett 75533 set doesn’t require a lot of time or previous set-building experience. This model has just 144 pieces, and an eight-year-old can assemble it in less than an hour. The posable Boba Fett action figure has battle armor and a helmet equipped with a rangefinder.

It also has a cape, a jet pack containing a flick missile, and a blaster with a spring load function. The fully assembled action figure is 9 inches tall. 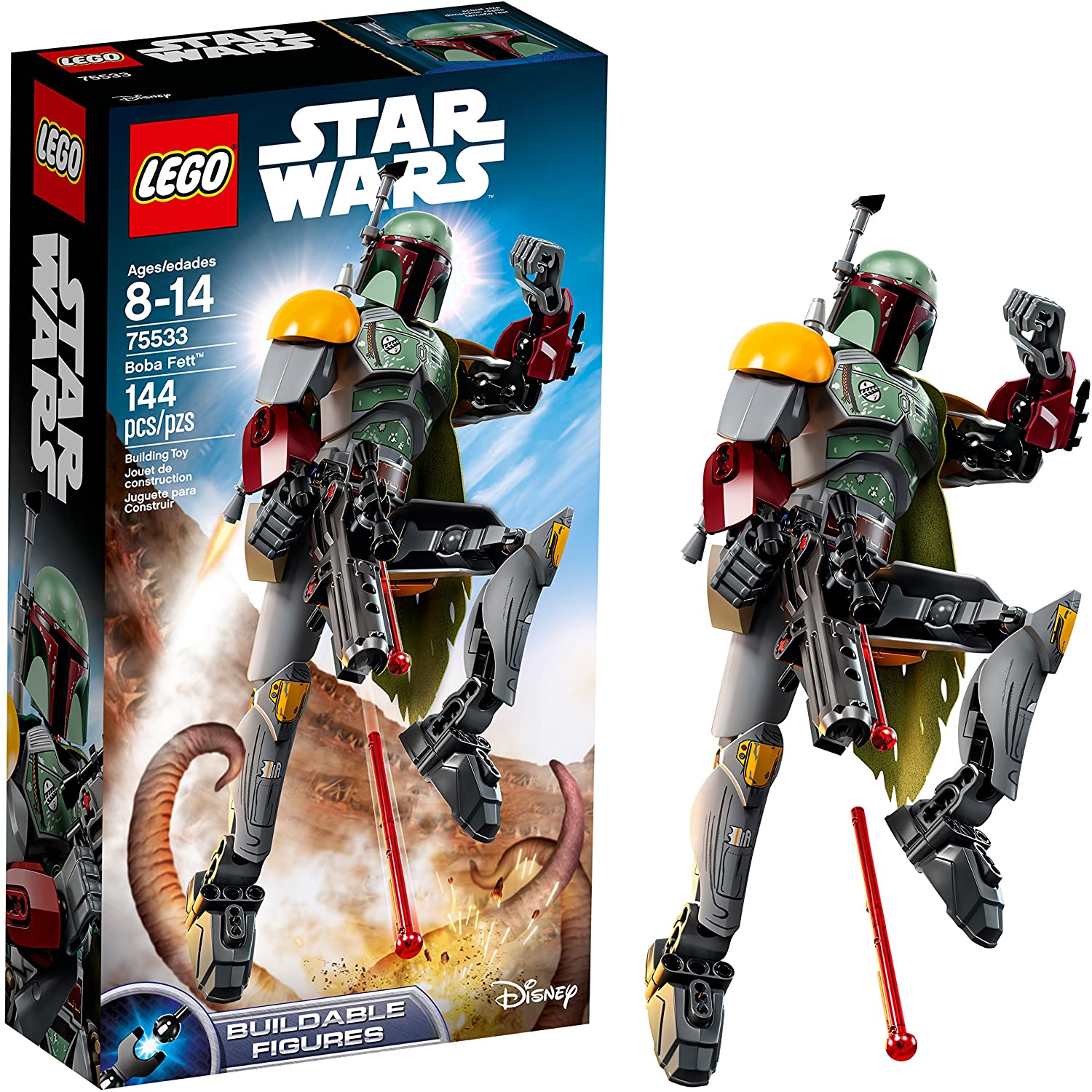 The Carbon Freezing Chamber 75137 is based on one of the most memorable scenes from Episode V: The Empire Strikes Back movie. Kids must save Han Solo from being frozen in Carbonite, and they can use the Boba Fett and Ugnaught to reenact the iconic scene.

The freezing chamber model has a control center, staircase, an elevator, and the freeze bed located at the chamber’s top platform. Kids can activate the freeze function by pulling the knob. 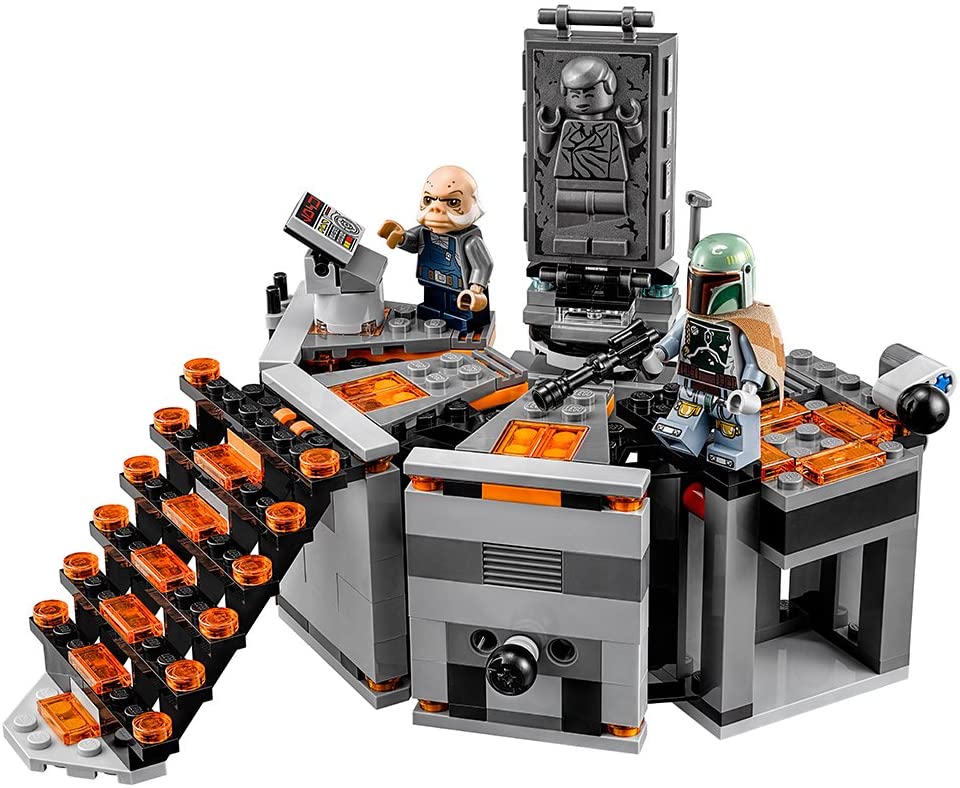 LEGO retired the Desert Skiff Escape 75174 set four years ago, but online retailers still offer this model at affordable prices. The skiff toy has an extendable plank, storage section, and adjustable rudders that allow the kids to steer the toy.

Transparent elements are located at the toy’s bottom to make it look like it is hovering. The Sarlacc element has teeth tentacles, and a Minifigure can fit in its mouth. This set comes with Han Solo, Skiff Guard, Chewbacca, and Boba Fett Minifigures. 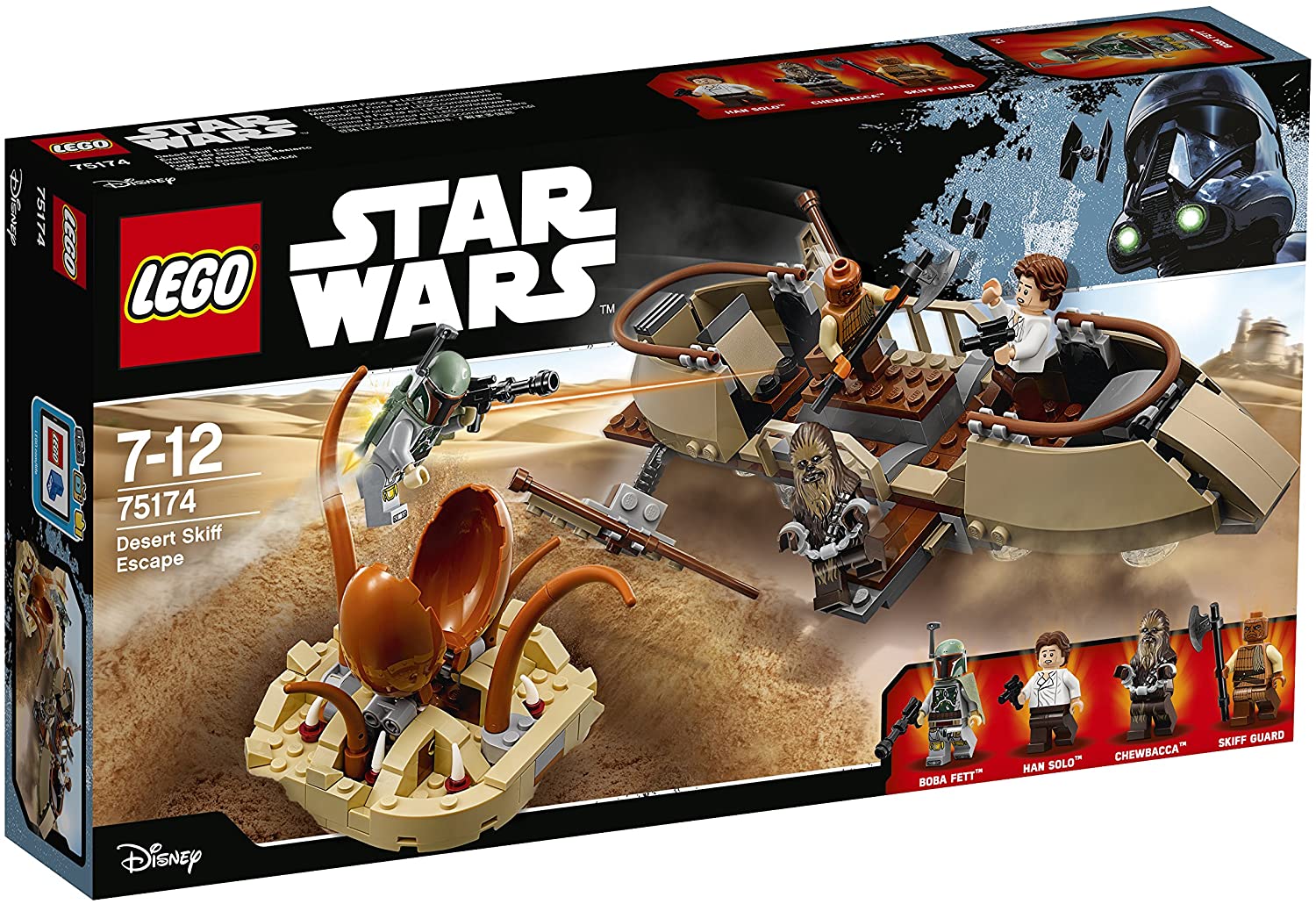 You should consider getting the Boba Fett 41629 set if you’d like to build a display model of this character based on his appearance in The Empire Strikes Back movie. This miniature figure is composed of 161 pieces, and it is just two inches tall without the baseplate.

The model has a helmet, rangefinder, and jet pack details, but you cannot adjust their position. This set is compatible with other Star Wars sets released within the BrickHeadz theme like Princess Leia Organa 41628 or Darth Vader 41619 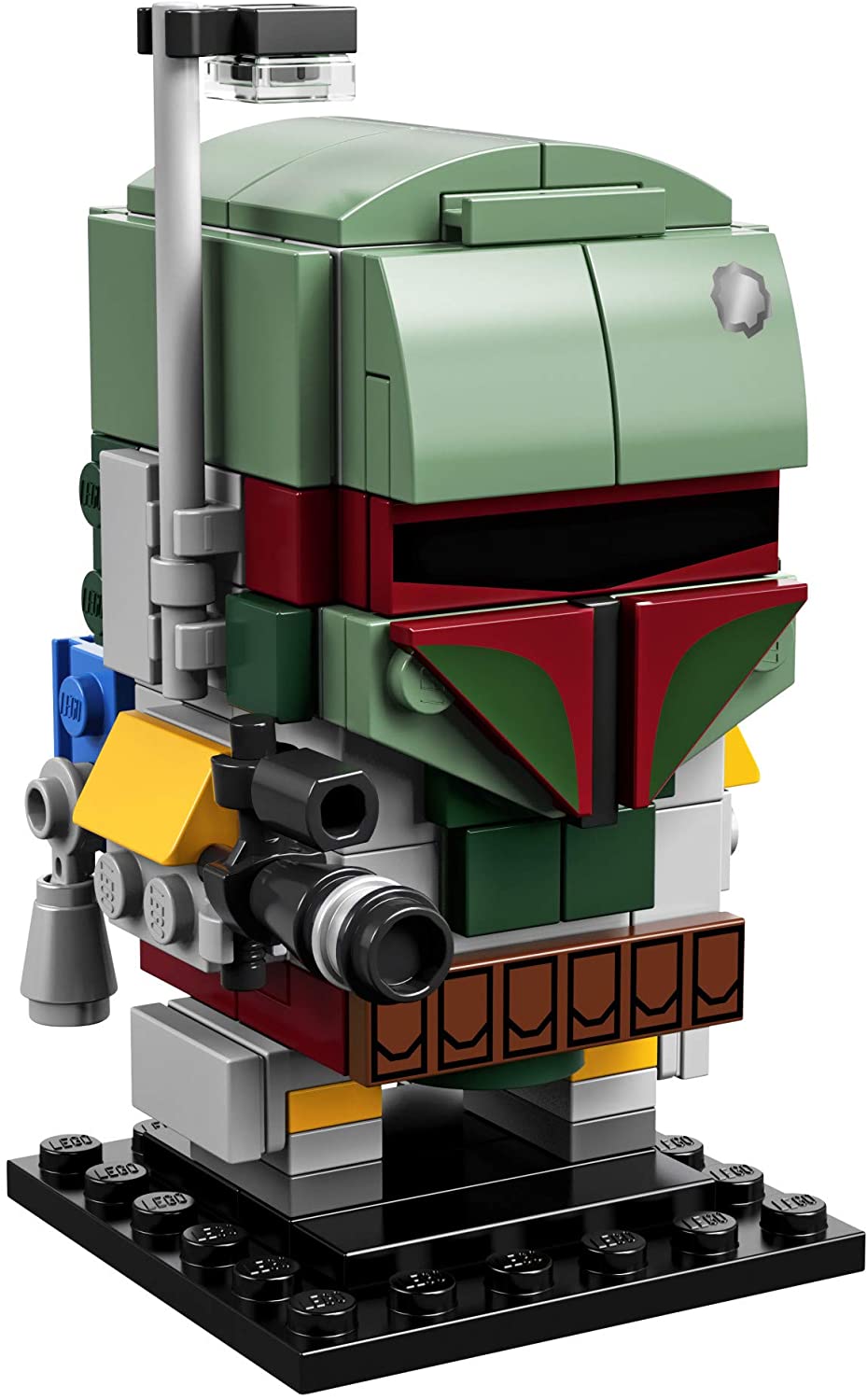 The Slave I 75060 is one of the most impressive sets inspired by Boba Fett’s spaceship LEGO ever released. The ship’s model is more detailed than any of its previous versions.

It has an opening cockpit for the Boba Fett Minifigure, rotating wings, side hatches with hidden guns, and a cargo area for the Han Solo in Carbonite element. The set features a display stand for the Slave I ship and a plaque that contains information about the ship. 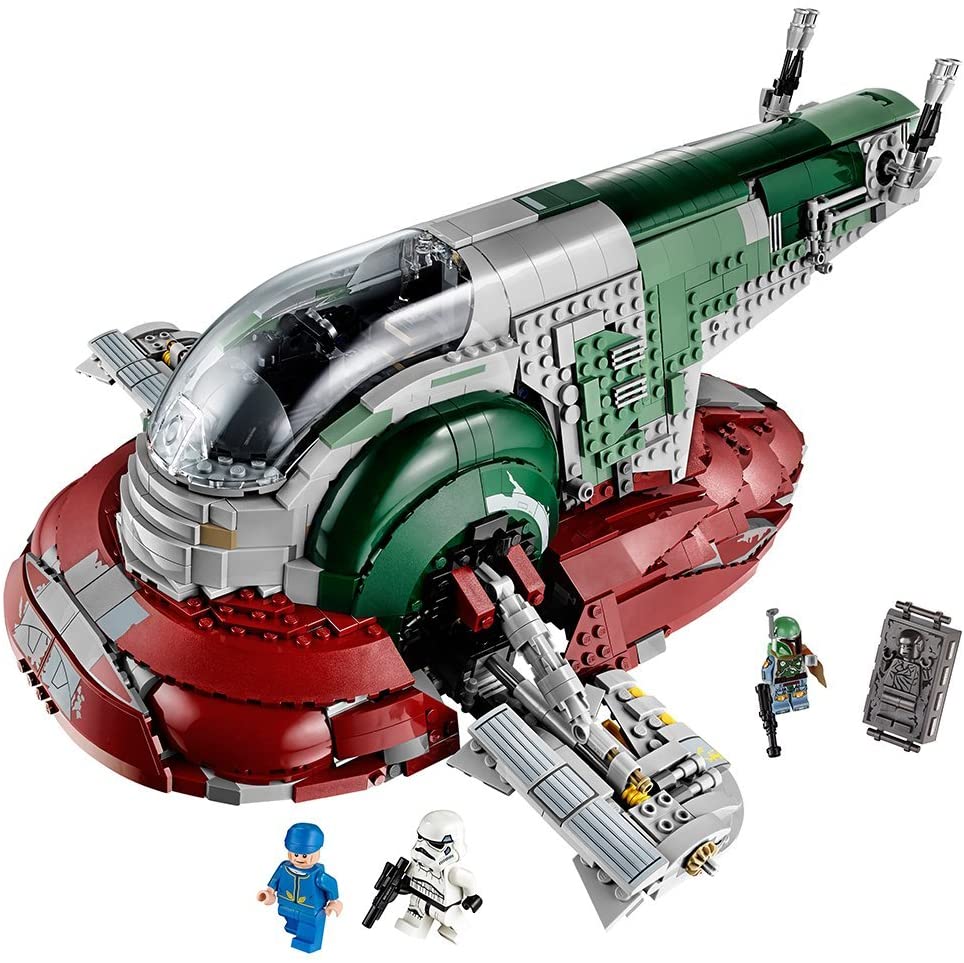 Question: Are all Boba Fett Minifigures the same?

Question: Which accessories do Boba Fett Minifigures have?

Answer: Rangefinder, jet pack, and sonic revolver are some of the most common accessories included with Boba Fett Minifigures.

Answer: Yes, LEGO already released one set based on this character since the beginning of the year, and more Boba Fett sets should hit the market before the year ends.

The Mandalorian and The Book of Boba Fett TV series reveal new segments of bounty hunter’s life and change the audience’s perception of the character. That’s why Boba Fett appears in LEGO sets both as a villain and The Mandalorian’s ally.

The Boba Fett’s Throne Room 75326 is the best active LEGO set inspired by this character because it is not hard to build and offers a variety of play options.

Models like Slave I – 20th Anniversary Edition 75243 or Slave I 75060 are some of the best options for collectors of Star Wars sets. Which LEGO Boba Fett set are you going to choose?

Let me know in the comments or continue reading our guide to the best LEGO Jurassic World sets if you’d like to learn more about the best models in this LEGO theme.