LEGO has produced more than sixty Clone Wars sets since 2008, and large online retailers still have most of these sets in stock. Their market value has increased drastically, so you may have to spend hundreds or thousands of dollars to get a model published in 2014 or earlier.

I recommend choosing one of the active sets from The Clone Wars subtheme like the Mandalorian Starfighter 75316 or the Armored Assault Tank (AAT) 75283 because they offer lots of play options and they’re affordable. If you’re collecting sets from this subtheme, you should consider getting the Republic AV-7 Anti-Vehicle Cannon 75045.

At a Glance: The 10 Best LEGO Star Wars: The Clone Wars sets

LEGO started releasing sets inspired by this animated series fourteen years ago, but most of these sets were published before 2014. Since then, LEGO hasn’t been adding new sets to this Star Wars subtheme every year.

Although choosing sets for this article was easy, I still utilized several parameters to identify the best LEGO Star Wars: The Clone Wars sets published in the last ten years. Let’s take a look at some of the key criteria I used during the selection process.

Our guide to the best LEGO Yoda set can help you decide which set featuring this Star Wars character is the best option for you.

The Overview of the LEGO Star Wars: The Clone Wars Subtheme

The first episode of the Star Wars: The Clone Wars premiered on October 3, 2008. LEGO launched a new product line with the same title by releasing the Anakin’s Jedi Starfighter 7669 and Hailfire and Spider Droid 7670 sets in January 2008.

The company added seven sets to this Star Wars subtheme in July, followed by two more models in December of the same year. The toymaker released more than forty sets within this subtheme by 2013 but published just two sets the following year.

The drop-off in production coincides with the show’s cancellation in 2014. LEGO hasn’t released a single set within this product line for the next three years. The company published two The Clone Wars sets in 2017 and 2018, before pausing the production of models inspired by this animated series for two years.

LEGO added five sets to this subtheme since 2020, but it remains unclear if the toymaker is planning new The Clone Wars models since the series’ last episode aired in May 2020. Please read our guide to the best LEGO lightsaber sets if you’re looking for LEGO sets inspired by Jedi weapons. 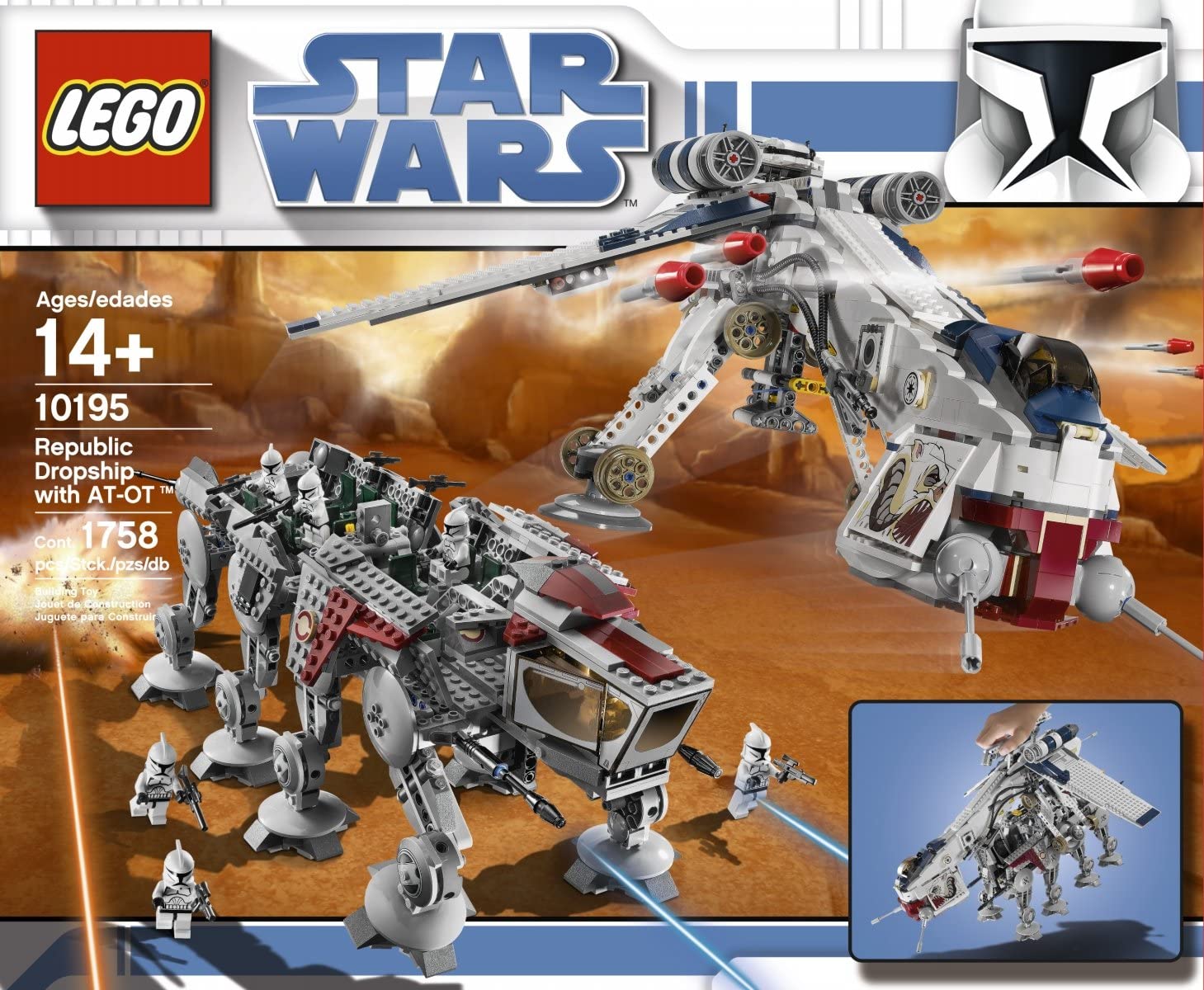 The contents of these sets haven’t changed significantly over the years. Most models published within this subtheme feature spaceships, droids, and assault tank toys accompanied by weapons and similar accessories.

Clone Turbo Tank 8098, Republic Frigate 7964, and Republic Dropship with AT-OT 10195 are among rare models with more than a thousand pieces released within this subtheme. In addition, none of The Clone Wars models LEGO published since 2014 had more than 600 pieces.

These sets are designed for LEGO fans aged seven or older, and they’re not difficult to build. However, their range of play options is limited because most models contain just one or two toys. They contain standard LEGO bricks, and they’re not suitable for children aged four or younger.

Check out our guide to the best 1500 piece LEGO sets for more information about the best models in this piece count range. 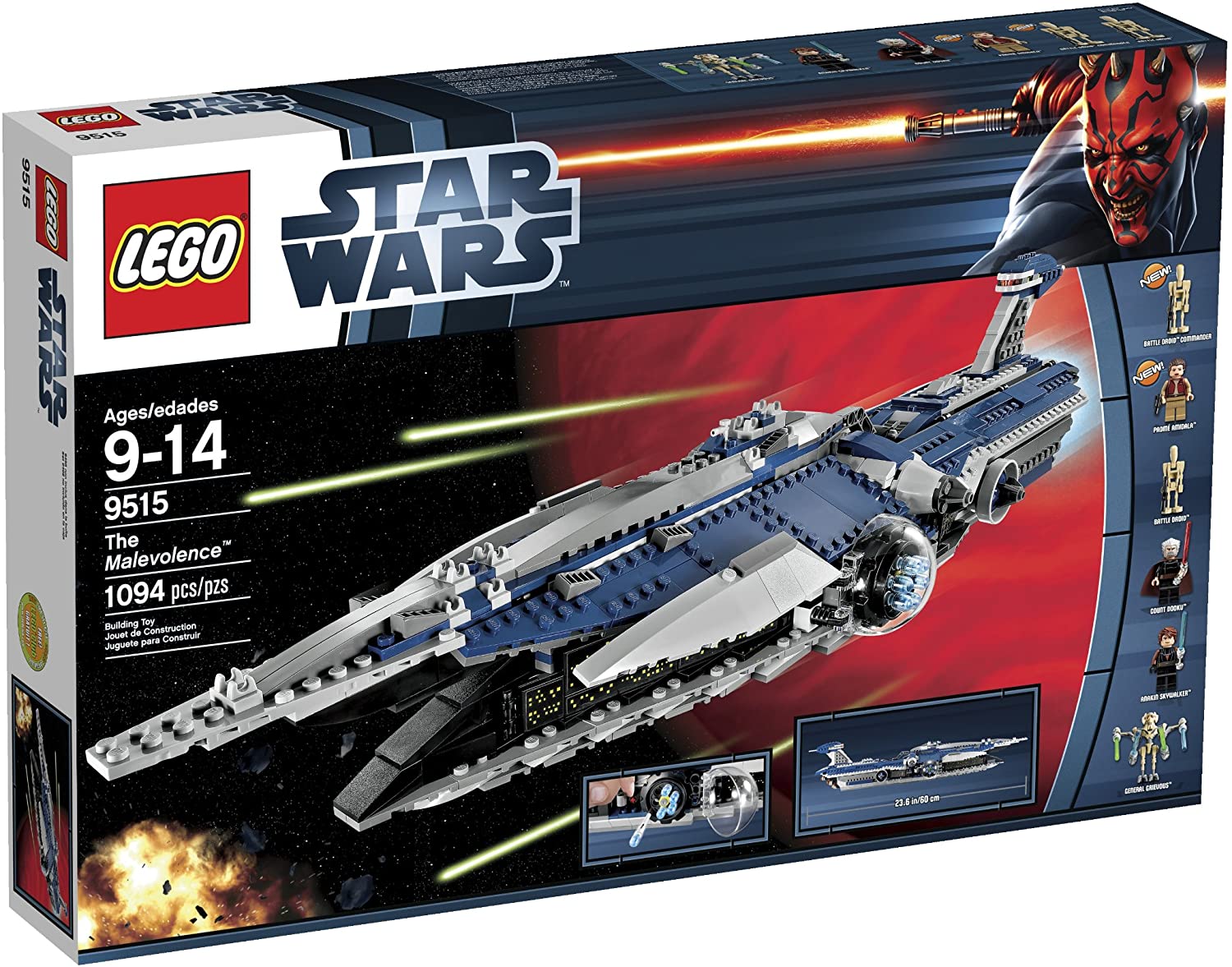 Nearly all LEGO Star Wars: The Clone Wars sets are discontinued. Furthermore, the models released in 2020 should retire by the end of 2022. Despite this, most online retailers have these sets in stock, and you’ll encounter them if you decide to shop for The Clone Wars set online.

Here are some of the most popular discontinued models from this Star Wars subtheme.

These sets are very expensive, and the models listed above cost up to $1,000. Finding an unopened LEGO Star Wars: The Clone Wars set isn’t easy, especially if you’re searching for a model discontinued more than ten years ago.

Due to their high price, retired LEGO sets from this Star Wars subtheme aren’t ideal for young LEGO fans who love playing with spaceships. Please browse through our guide to the best Amazon LEGO sets to discover some of the best LEGO sets the e-commerce platform offers.

Standard Star Wars Minifigures were redesigned for sets released within the Clone Wars subtheme. Obi-Wan Kenobi, Anakin Skywalker, Yoda, or R2-D2 Minifigures were modeled after their appearance in the animated series.

Their eyes are bigger, and their contours have sharper angles than the versions published in other Star Wars sets. Moreover, these sets feature Minifigures of Star Wars: The Clone Wars characters that don’t appear in other LEGO Star Wars sets.

The factors to consider while choosing a LEGO Clone Wars set

Besides being a valuable addition to any collection of Star Wars: The Clone Wars sets, the Mandalorian Starfighter 75316 set is also an excellent gift for a young LEGO fan who loves building spaceships. The starfighter toy has adjustable wings, two stud shooters, and its cockpit has room for two Minifigures. 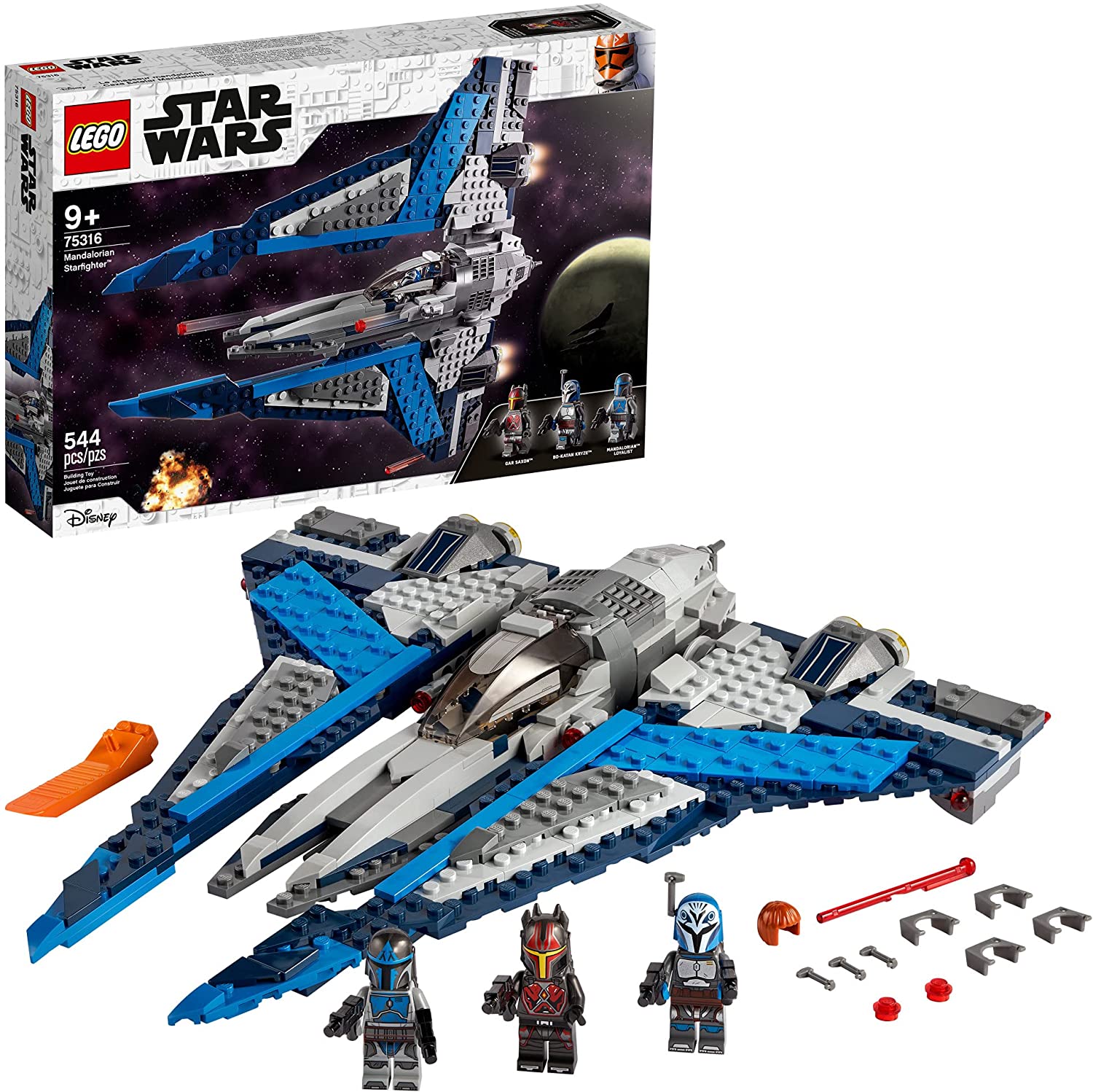 Kids aged seven or older can recreate one of the most memorable scenes from The Clone Wars series with Duel on Mandalore 75310 set. This model was inspired by the duel between Ashoka Tano and Darth Maul during the siege of Mandalore in the Sundari Palace.

This set features a throne element with a hidden drawer and a Mandalorian vault element. The Darth Maul Minifigure comes with a double-bladed lightsaber, while the Ashoka Tano Minifigure is armed with two blue lightsabers. 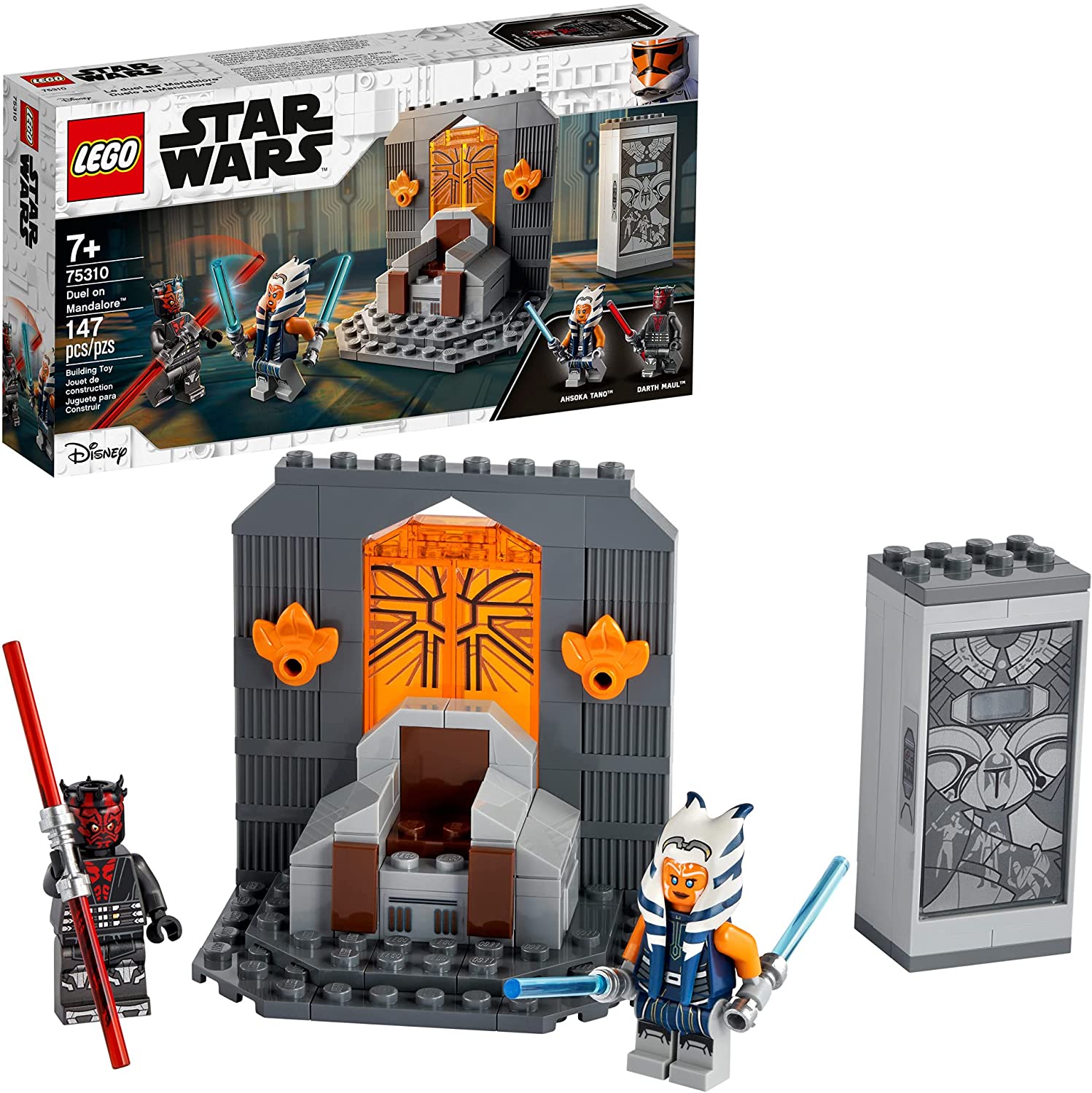 Despite having fewer than 300 pieces, the Armored Assault Tank (AAT) is still an entertaining set designed for novice LEGO builders. The AAT has a rotating turret equipped with cannons and two opening hatches that allow kids to place battle droids inside the tank. 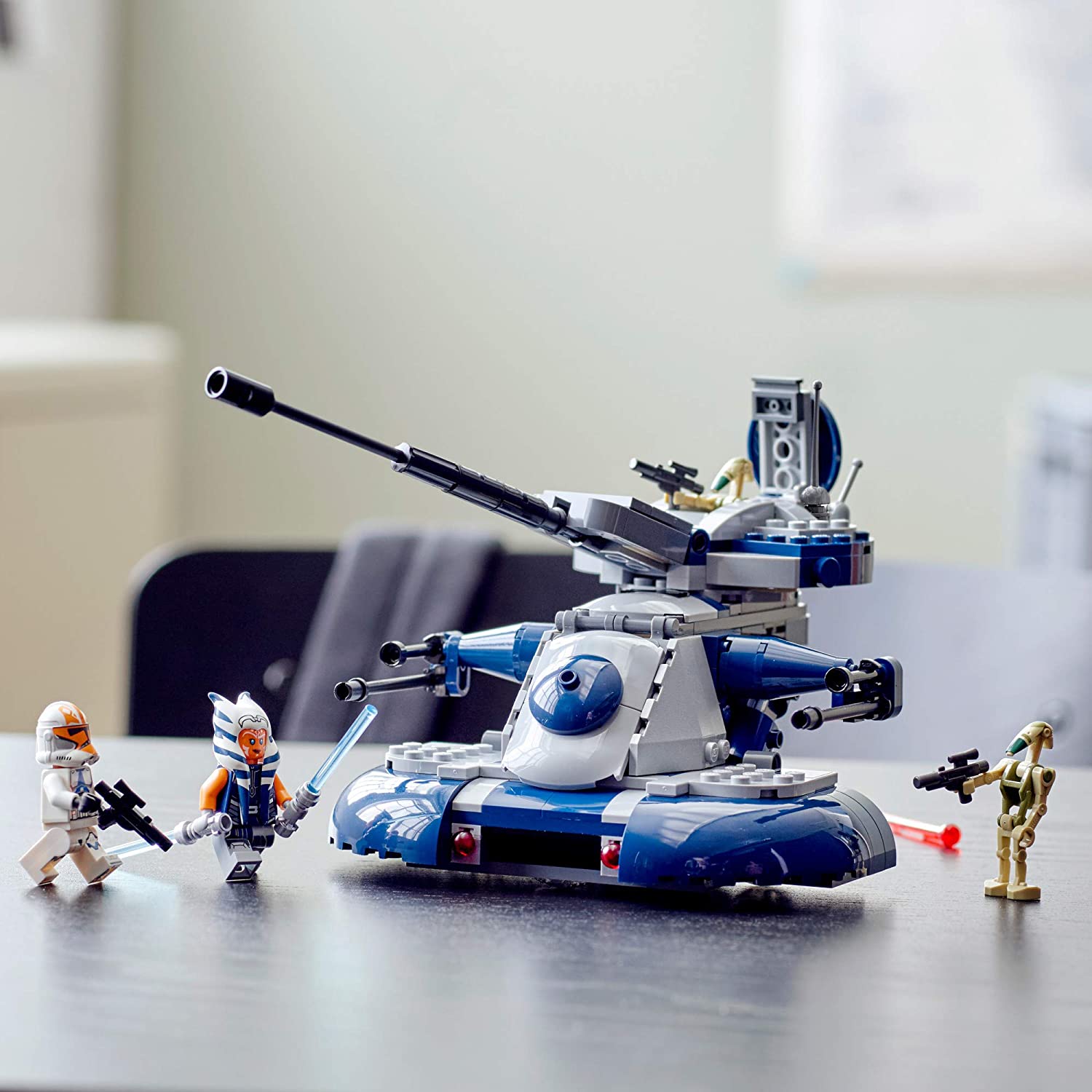 Combining the Armored Assault Tank (AAT) set with the 501st Legion Clone Troopers 75280 will enable you to stage epic fights between battle droids and clone troopers. These sets have almost the same piece counts, and you won’t need previous experience to construct them.

BARC speeder toy has two stud shooters and a seat for one Minifigure, while the AT-RT figure has adjustable legs and attachments for electrobinoculars and blaster pistol accessories. This set has three Clone Trooper, two Battle Droid, and one Jet Trooper Minifigures. 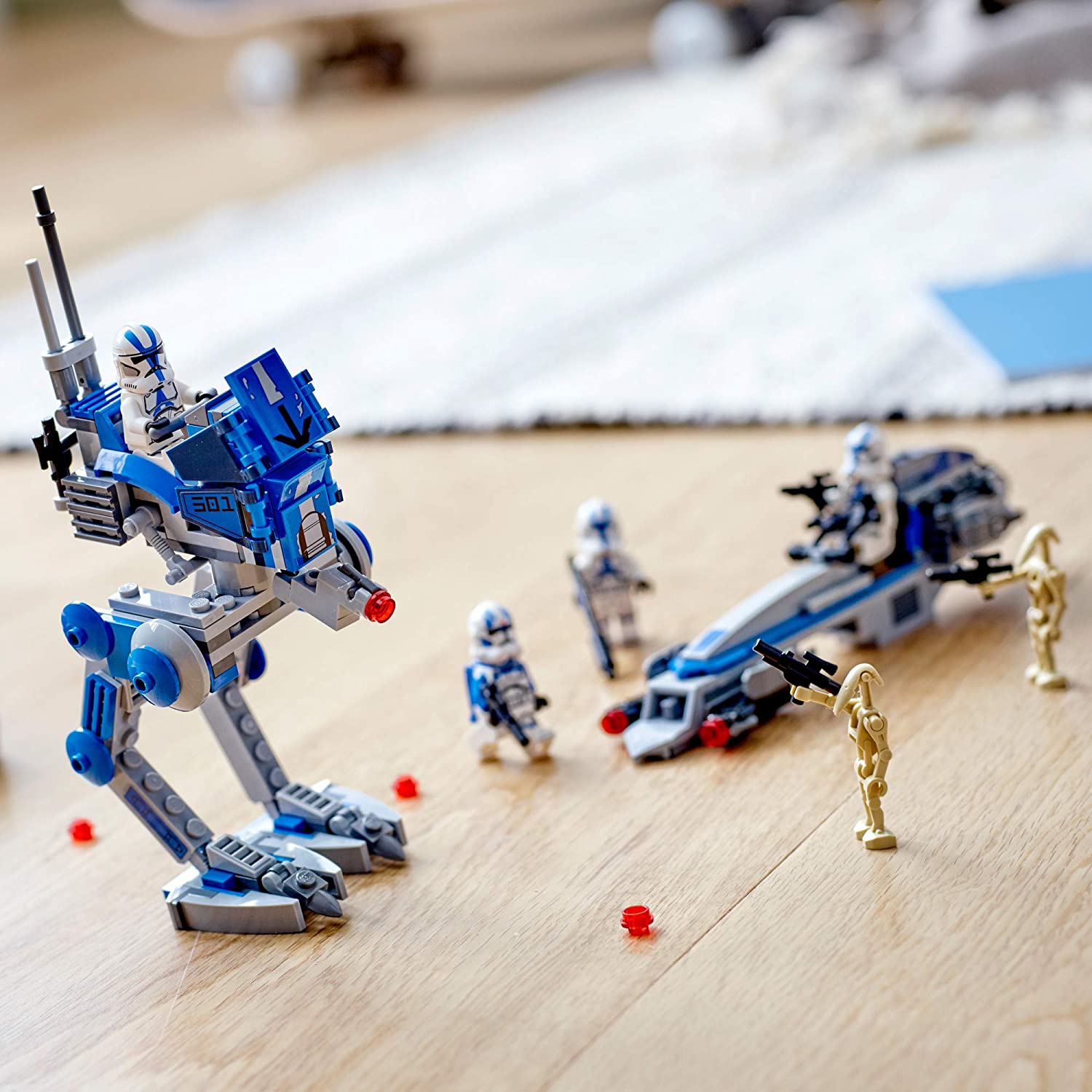 LEGO retired the Anakin’s Jedi Interceptor 75281 set recently, and its price in online stores has nearly doubled since then. This model doesn’t contain other elements except the Jedi Interceptor toy with foldable wings and stud shooters.

An opening cockpit is spacious enough to accommodate the Anakin Skywalker Minifigure, while the R2-D2 Minifigure can be placed on one of the toy’s wings. Aside from the Anakin’s lightsaber, this set doesn’t feature other accessories. 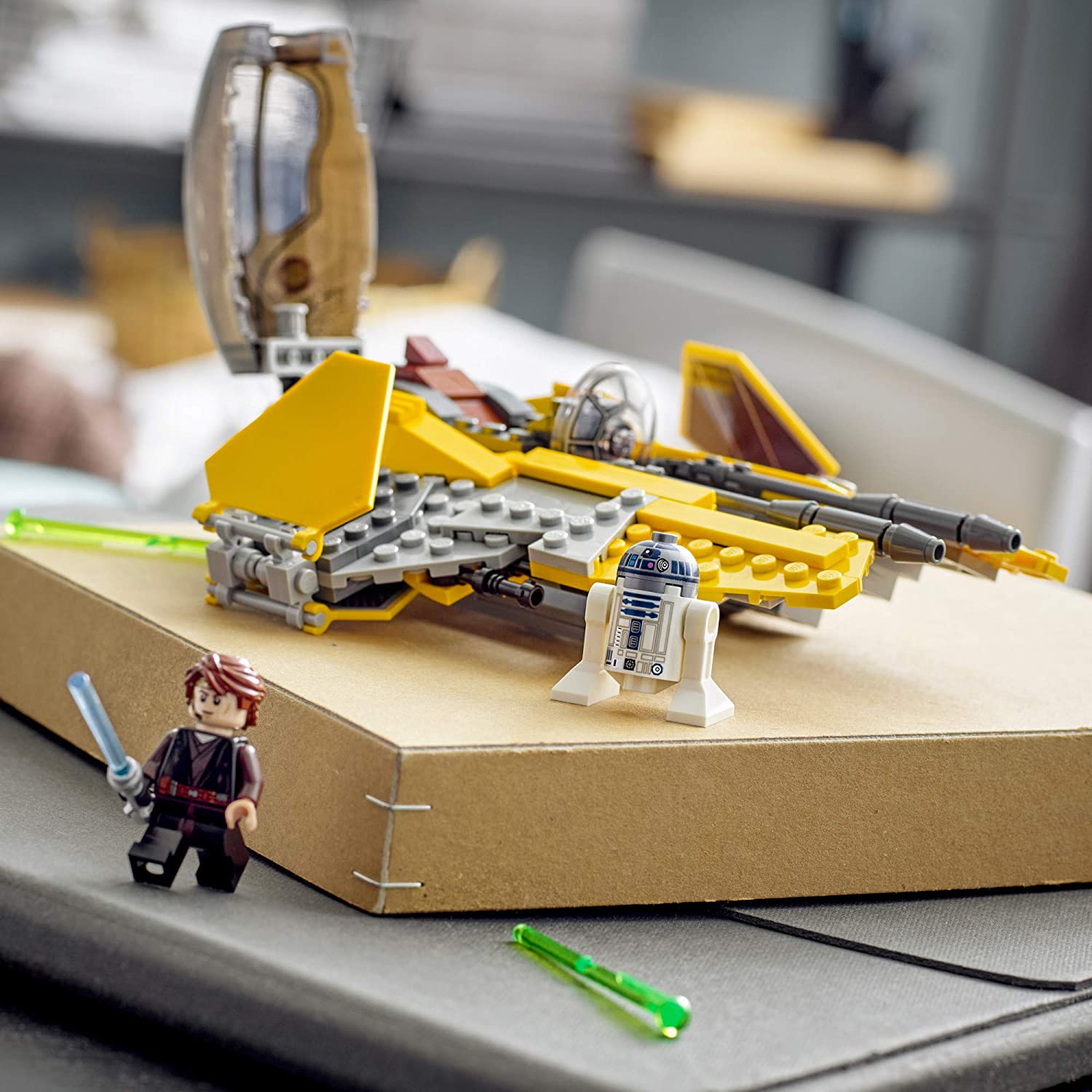 A simple set like the Anakin’s Jedi Starfighter 75214 doesn’t have much to offer to experienced LEGO builders because it has just 247 pieces and contains a handful of accessories. However, young Star Wars fans can use it to improve their set-building skills.

The Jedi Starfighter toy is ten inches long and five inches wide. It has landing gear at the bottom, stud shooters in the wings, and an ammo compartment. The space for the R2-D2 figure is in front of the opening cabin that accommodates the Anakin Skywalker Minifigure. 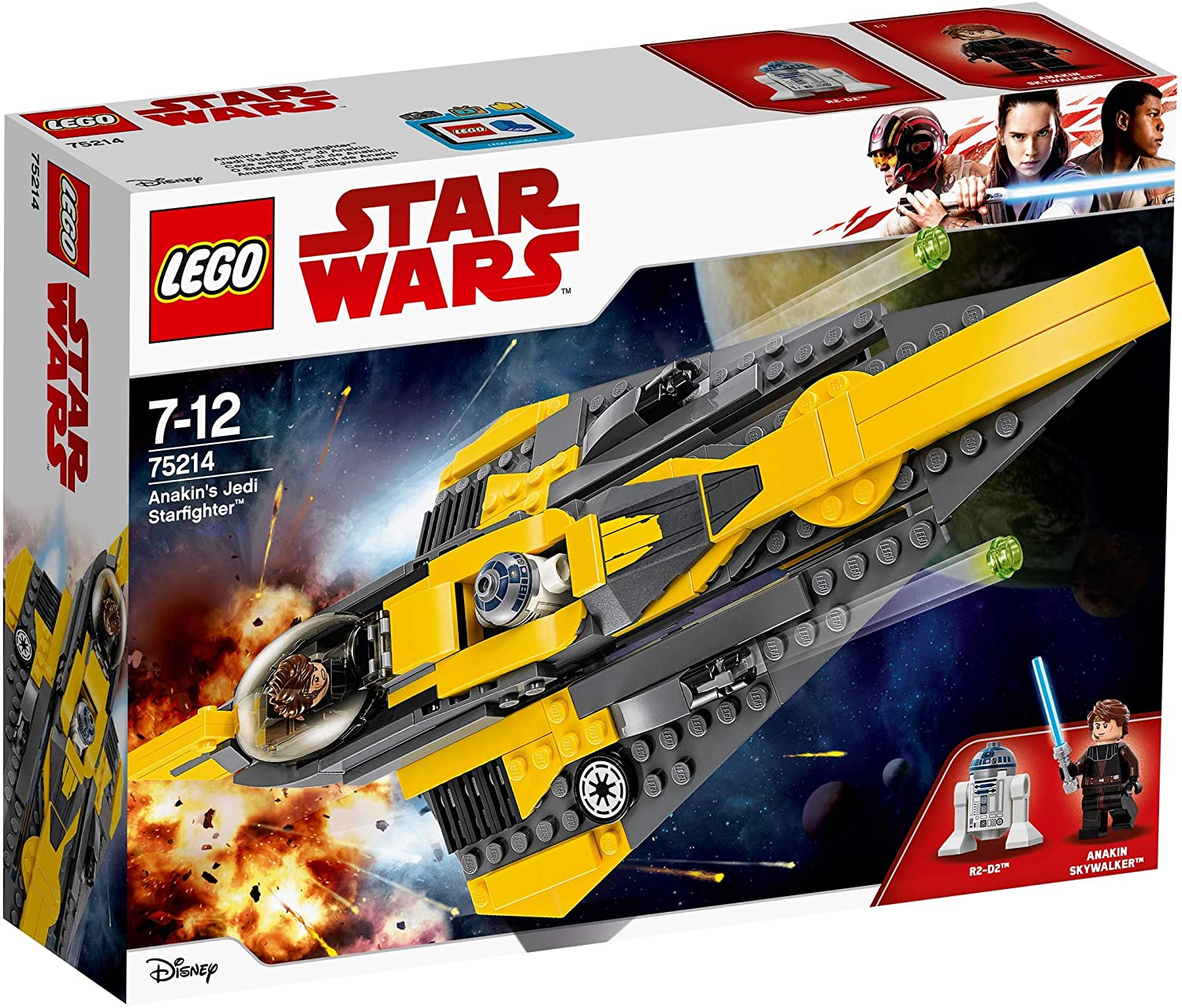 You should consider getting the General Grievous’ Combat Speeder 75199 if you’re searching for a set inspired by one of the main antagonists in the Star Wars: The Clone Wars series. The combat speeder toy isn’t impressive, and it is just nine inches long. 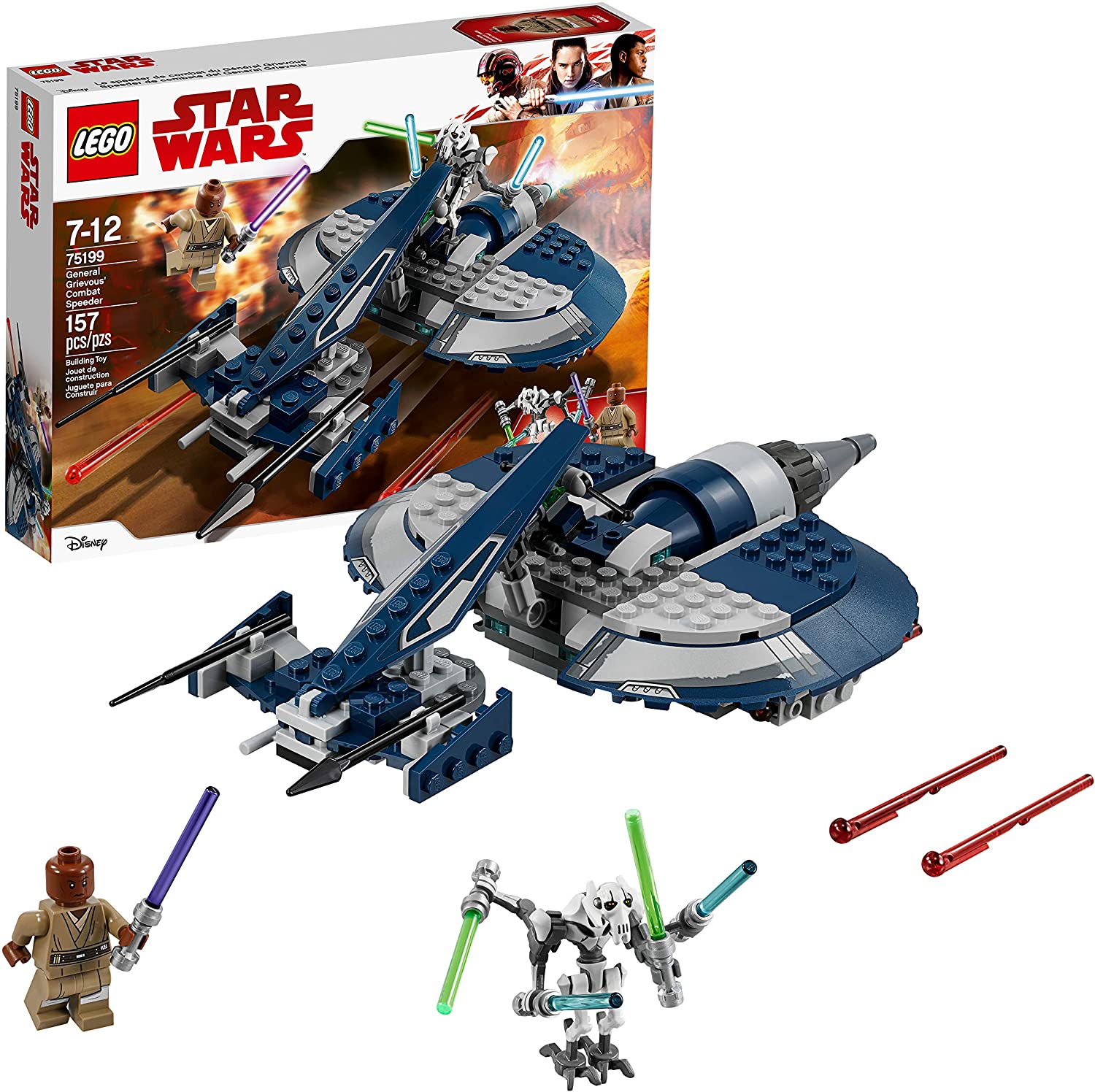 Even though LEGO retired the Republic Fighter Tank 75182 set years ago, this model is still one of the best Star Wars: The Clone Wars set on the market. The product’s market value increased substantially since it was discontinued, so this set is no longer as affordable as it once was.

The Fighter Tank toy has two guns with stud shooters you can elevate during battles, hidden wheels, and an ammo storage compartment. The hatch at the top opens so that you can place a Minifigure inside the tank. 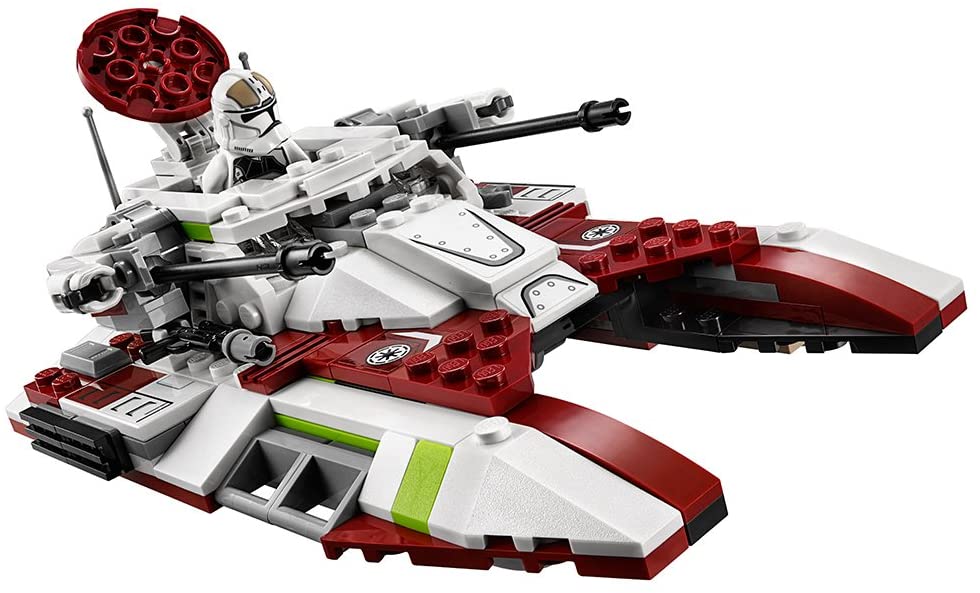 Constructing the Joda’s Jedi Starfighter 75168 set doesn’t take more than a few hours, even if you have no previous set-building experience. The miniature starfighter toy has foldable wings, two laser cannons, and a pair of spring-loaded stud shooters.

The seat for the R2-D2 figure is located above the opening cockpit, which is large enough to fit the Yoda Minifigure. The starfighter doesn’t have landing gear which affects its stability, but it won’t come apart while children play with it. 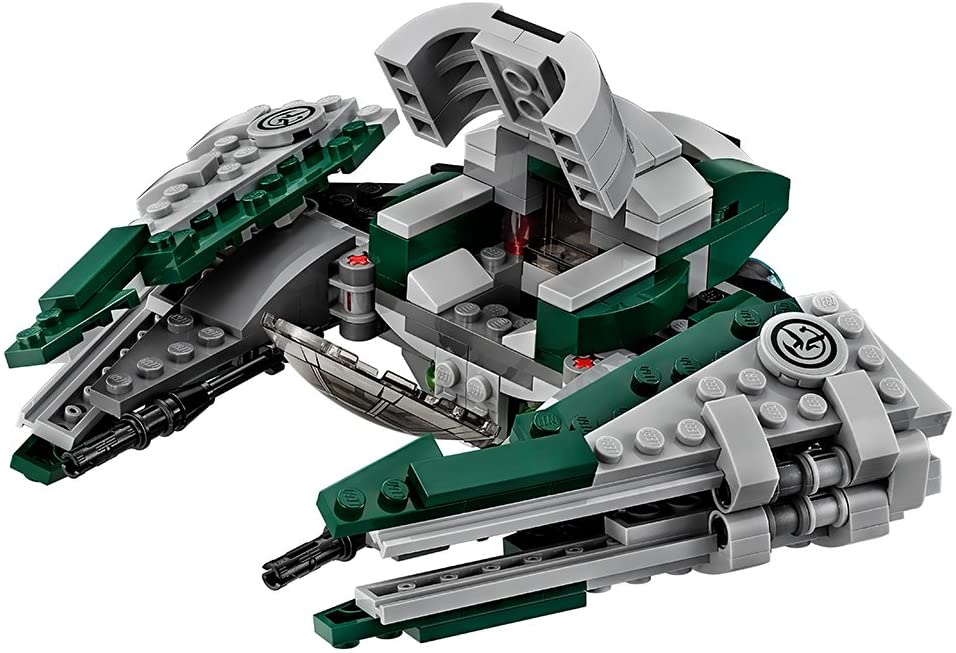 It’s been nearly ten years since the Republic AV-7 Anti-Vehicle Cannon 75045 set went out of production, and you may not be able to find it easily. This set was only available in selected stores besides LEGO-certified stores while it was active, so it’s not a surprise that it has become a rarity.

The anti-vehicle cannon toy has adjustable legs that allow you to change its position and a pair of hidden wheels. The toy’s equipped with a flick missile shooter. Plo Koon and two Wolf Pack Clone Trooper Minifigures come with blaster and lightsaber accessories. 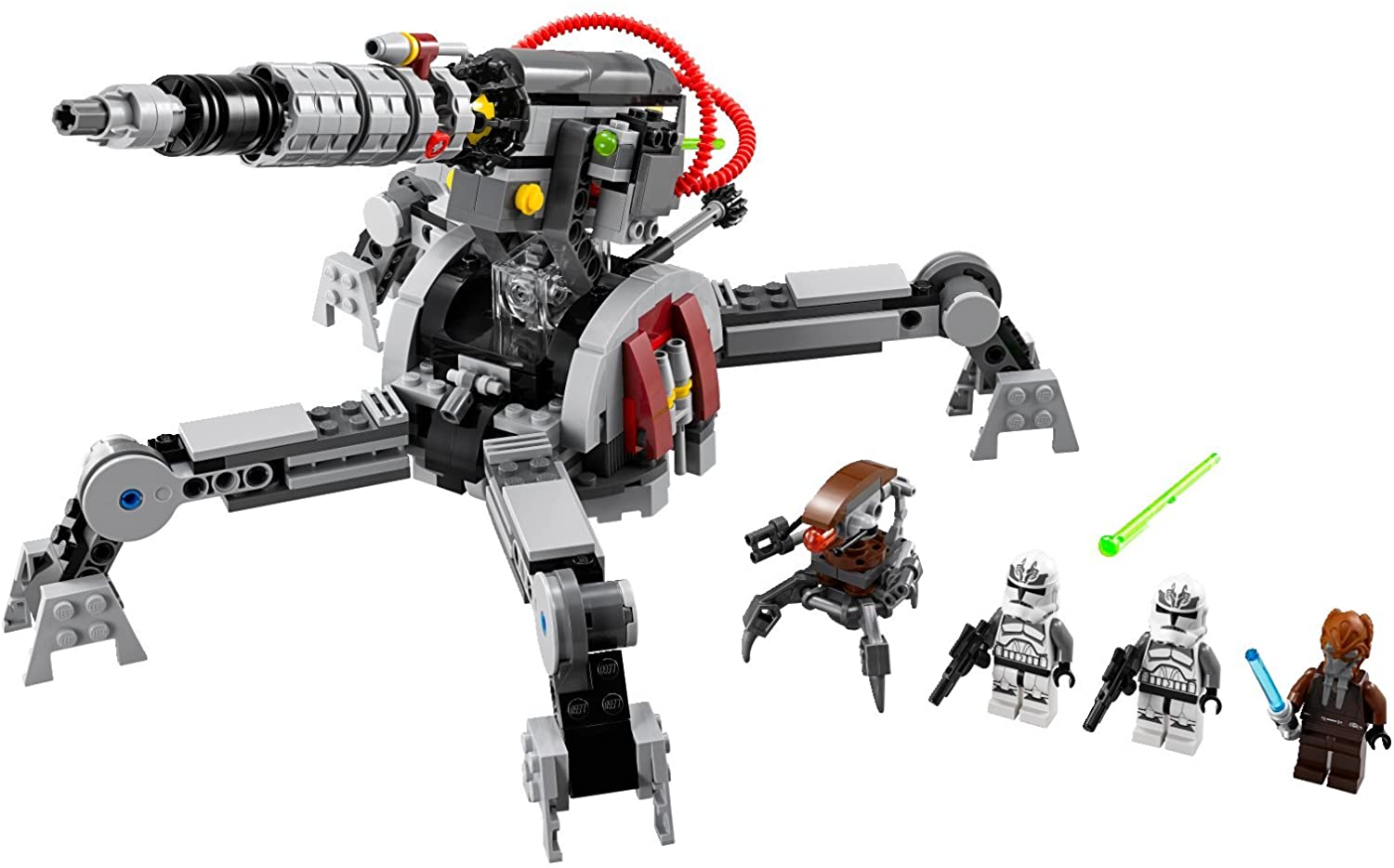 Answer: The company hasn’t made any plans to retire this subtheme public.

Question: What is the biggest LEGO Star Wars: The Clone Wars set?

Answer: The Republic Dropship with AT-OT 10195 is the largest LEGO Star Wars: The Clone Wars set ever. It has 1,758 pieces.

Answer: LEGO released the last mini-set within this subtheme in 2011.

Answer: Yes, they are, and some models can cost more than $20.

My Verdict: How to Pick the Best LEGO Star Wars: The Clone Wars set

The Clone Wars used to be one of the main subthemes of the LEGO Star Wars theme. The animated series that served as inspiration for the subtheme ended a couple of years ago, and since then, LEGO published only five new The Clone Wars sets.

Choosing an active set like the Mandalorian Starfighter 75316 or Armored Assault Tank (AAT) 75283 will help you avoid overspending on a retired set with a few hundred pieces.

Let me know in the comments or continue reading our guide to the best LEGO sets of all-time to learn more about some of the iconic models LEGO published.