Although not as popular as Marvel or Disney sets, LEGO Ghostbusters have attracted a lot of attention from adult and young fans over the years. This LEGO ECTO 1 review is dedicated to one of the most impressive Ghostbuster sets LEGO released since 2014.

The 2020 Ghostbusters ECTO-1 10274 model lets you build a replica of the legendary vehicle featured in the movie franchise’s most recent sequel, Ghostbusters: Afterlife.

Unlike previous iterations released in 2014 and 2016, this promotional model is designed for adult LEGO fans with advanced set-building skills.

The Ghostbusters ECTO-1 10274 is one of the most entertaining active sets in the Creator Expert theme. It offers a rewarding construction experience, with plenty of innovative sub-assemblies and creative solutions for different segments of the vehicle. The set’s high price tag is its only major downside.

The Ghostbusters ECTO-1 21108, published in 2014 within the LEGO Ideas theme, was the first LEGO set ever inspired by the Ghostbusters franchise. This set had just 508 pieces, and it was designed for kids aged ten or older.

Two years later, the toymaker released the Ghostbusters ECTO-1 & 2 set to promote the 2016 Ghostbusters movie. Its piece count and target audience were similar to the first version of this set.

The November 2020 release of the Ghostbusters ECTO-1 10274 was scheduled to coincide with the premiere of the Ghostbusters: Afterlife movie. The set has 2,352 pieces, and it lets you construct a display model of a V8 1959 Cadillac Series 62 Miller-Meteor Sentinel limo equipped with ghost-hunting equipment.

Unlike earlier versions of LEGO ECTO-1 sets, this model doesn’t contain Minifigures of the movie’s main characters or Ghostbusters-themed accessories. Its exit date is still uncertain, but all signs indicate that LEGO plans to retire this set by the end of 2022. 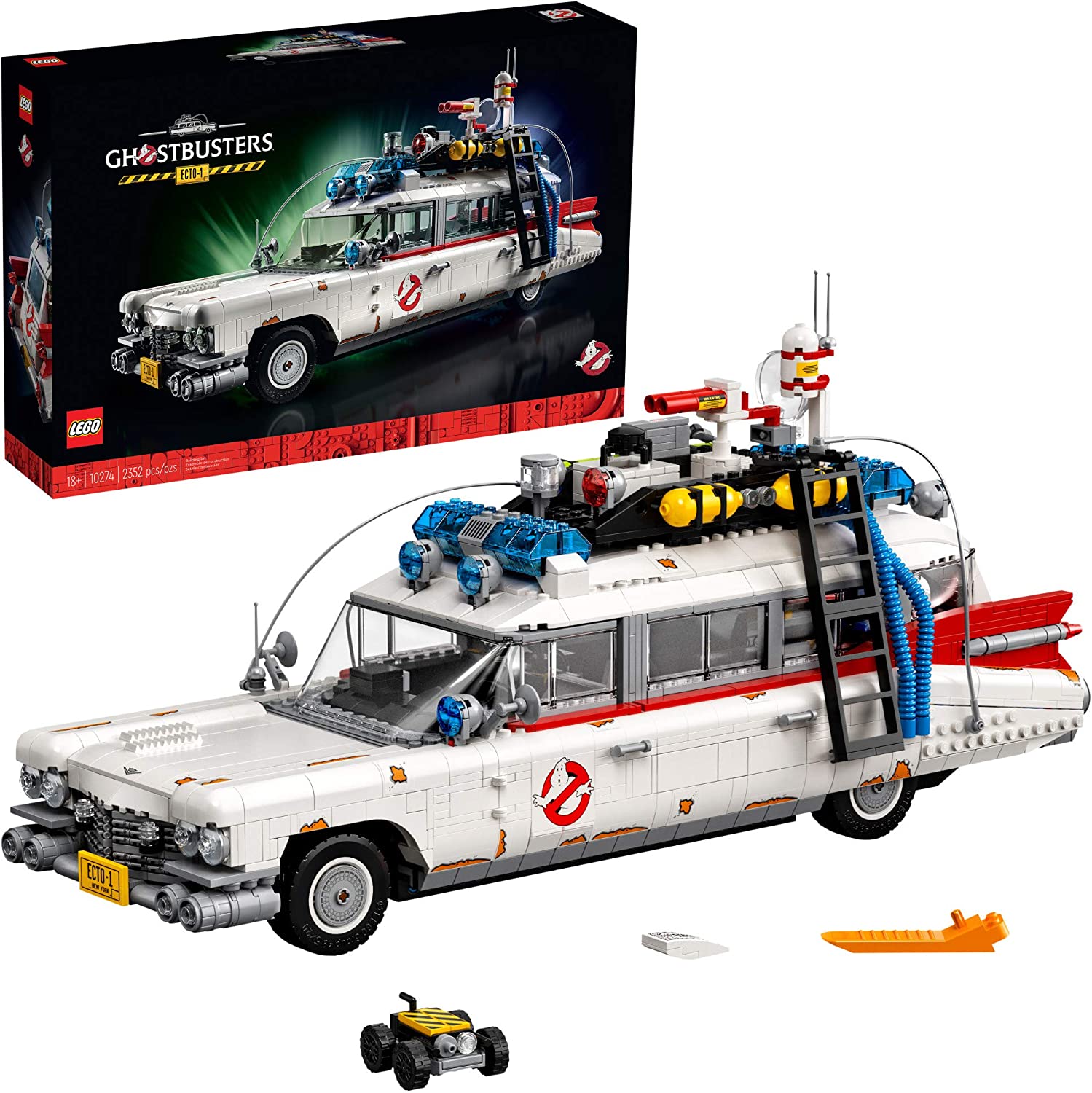 On the outside, the Ghostbusters ECTO-1 10274’s box doesn’t look much different than the packaging of other sets from the Creator Expert inspired by blockbuster movies.

The front cover features a picture of the fully assembled Ectomobile accompanied by the set’s title, while the recommended age group and other information are located at the bottom left corner. The box’s underside shows the vehicle from another angle, and it showcases its features.

The building instruction booklet styled after vintage Hynes car manuals is a work of art. It has 312 pages, including ten pages of ECTO-1’s history, stills from Ghostbusters movies, and original sketches of the vehicle.

Set’s 2,352 pieces are divided into 23 bags numbered one to twelve. The extensive sticker sheet contains numerous rust stickers that allow you to choose between refurbished and rusty looks depicted in the Ghostbusters: Afterlife movie.

The construction process has more than six hundred steps, and it takes place in four stages.

An overview of the set’s pieces

This set contains a combination of Technic and System parts, and most pieces are not exclusive to this model. However, the Ghostbusters ECTO-1 set also includes several rare and unique pieces, like the Technic shock absorber element that was included only in the Ducati Panigale V4 R 42107 set.

Other rare pieces include:

Three 1×4 bricks with a Ghostbusters logo print, a steering wheel with four studs in the middle, and 6×14 windscreen elements are exclusive to this set.

This Creator Expert model doesn’t have an Ultimate Collector Series label, which is probably the reason why a display plaque with information about the vehicle isn’t on its part list. 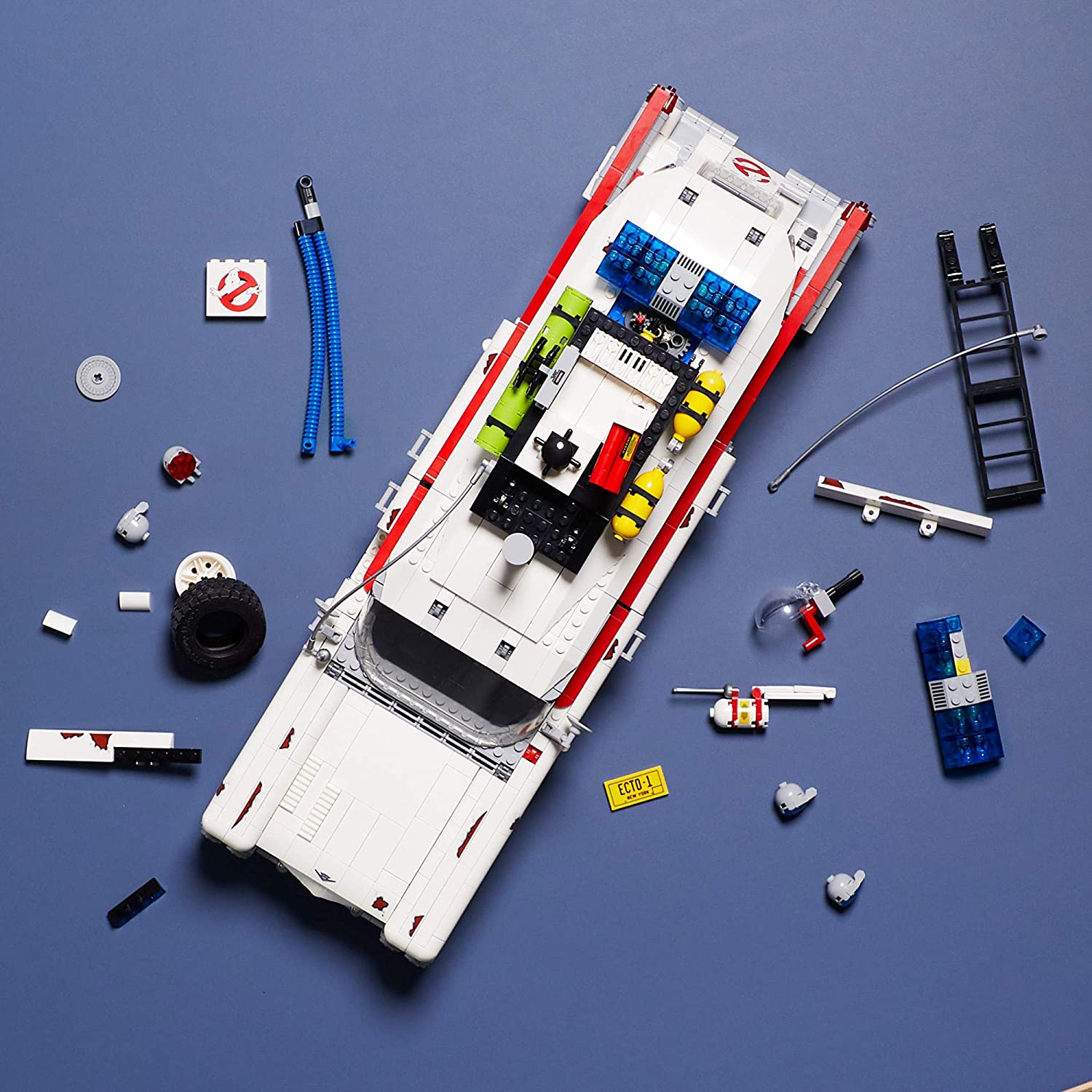 The construction of this display model begins with building the vehicle’s chassis. Bags with numbers one through three contain the pieces you need to complete this stage of the assembly process.

The vehicle’s steering system is built into its undercarriage, as well as the ‘gunner chair’ equipped with the Proton Pack that extends from the car by pushing the side panel. A 1×4 brick prevents the mechanism from sliding outside of the vehicle’s undercarriage.

As you move through the construction process, you’ll start to build the rear bumper, door elements, and the vehicle’s interior. The dashboard has a sticker speedometer, but other instrumentation elements are printed directly on tile pieces.

Besides ghost-hunting equipment and several Technic mechanisms that make the model’s action features possible, the vehicle’s interior doesn’t offer a ton of details. The engine element decorated with multiple Cadillac stickers is assembled relatively late in the construction process.

Once you put the engine together, you can attach the steering wheel piece to the steering system and proceed to build the windshield, windows, and the fifth door with the Ghostbusters logo and optional rust stickers.

The roof with a steering knob, Modified Marine Radome Antenna, Federal Siren, T.U antenna, and other roof-mounted equipment are assembled at the end of the construction process. The building instructions booklet offers additional information about the equipment and vehicle’s parts.

A look at the completed model

Set’s designer Mike Psiaki said that the most challenging part of creating the latest LEGO ECTO-1 model was recreating the Cadillac’s curves and slopes. The accuracy of the completed model is stunning as it does a great job of recreating the vehicle’s look in the latest Ghostbusters movie.

The gunner seat is easy to activate. However, closing the door after pushing the element back can be difficult due to the proton pack cord that doesn’t always slide into its place.

The trunk door opens to reveal a removable R.T.V (Remote Trap Vehicle), but you can also use an activation lever to open the trap door and release the R.T.V. Arguably, the set’s most underwhelming elements are the stickers, as they’re repetitive.

License plate pieces also feature stickers that are difficult to apply due to the size of these pieces. The ECTO-1 measures 18 x 8 x 6 inches, and it is slightly bigger than the DeLorean model from the Back to the Future Time Machine 10300 set. 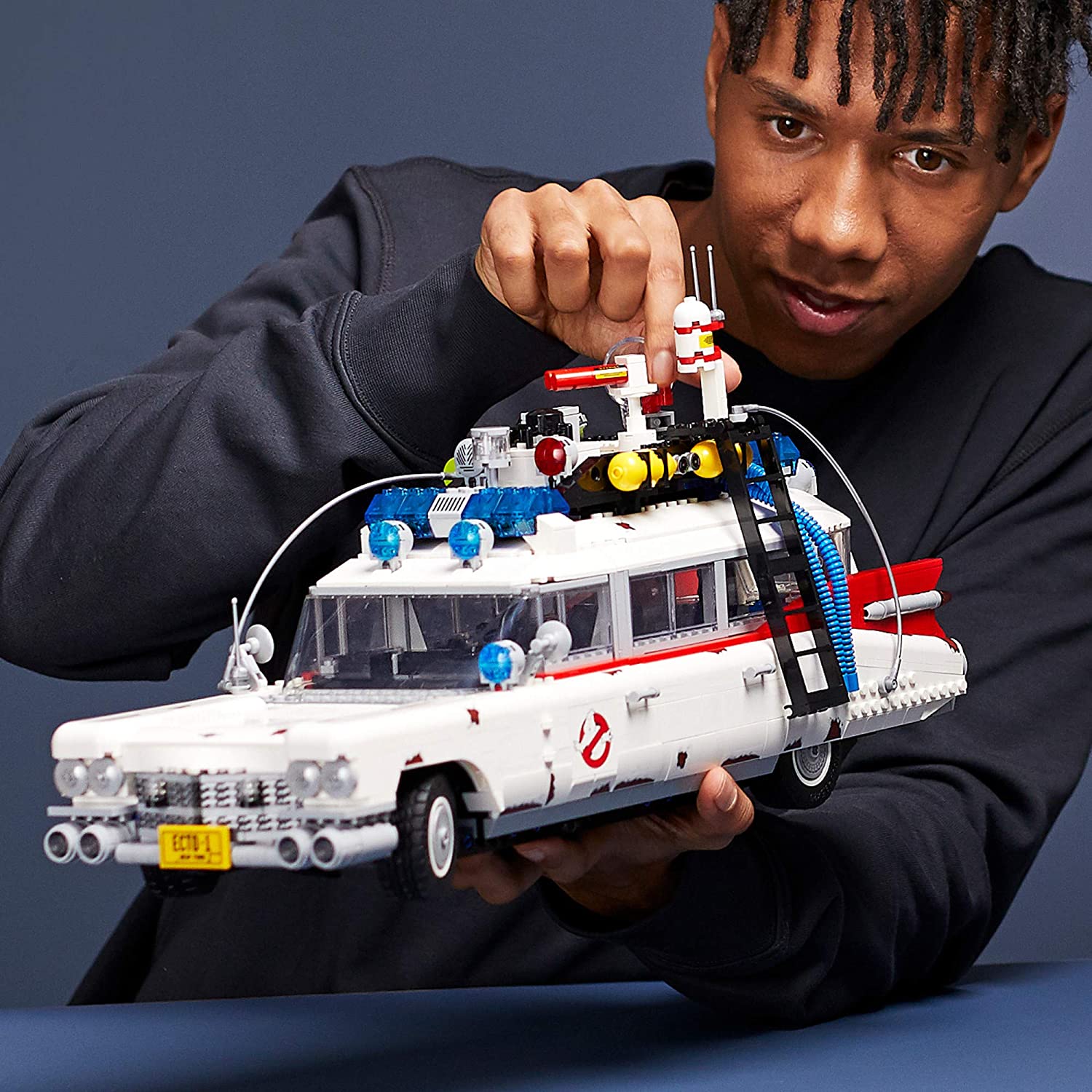 The LEGO Ghostbusters ECTO-1 10274 is a build to display set, so playability isn’t its strong suit. In addition, this set is designed for LEGO builders who favor the quality of the assembly process over the play options it offers.

The lack of accessories and Minifigures prevents you from recreating scenes from Ghostbuster movies, but a variety of vehicle’s fun features offer excellent compensation for these shortcomings.

Steering the vehicle is easy, as you just have to push it gently and turn the steering knob disguised as a roof light in the direction you choose. It’s also worth pointing out that the T.U antenna and radar dish elements rotate while the rest of the roof equipment is static.

I don’t recommend using the ECTO-1 display model for active play because some of its elements come off easily.

The current market value of the Ghostbusters ECTO-1 10274 set is just under $200, which makes it one of the priciest models in the Creator Expert theme. However, the high piece count, rewarding construction experience, and beautiful display model of the ECTO-1 vehicle more than justify a high price tag.

This LEGO model doesn’t have an Ultimate Collectors Series label, but as the second-largest Ghostbusters set ever, it’s likely to become a collector’s item. The set’s value will increase shortly before and after its retirement, and its market value could easily balloon to over $600.

The Hard to Find designation on the LEGO website indicates that the set’s exit date is approaching. Still, the manufacturer hasn’t released the model’s official exit date, but its production should cease before the end of 2022.

Pros and Cons of the LEGO Ghostbusters ECTO-1 10274 Set

The Best Alternatives to the LEGO Ghostbusters ECTO-1 10274 Set

The Ghostbusters ECTO-1 10274 is the only active LEGO set inspired by this movie franchise. What’s more, LEGO released just five Ghostbusters sets since 2014, and there’s no indication that the toymaker is planning to release new models.

Hence, you can either opt for one of the retired LEGO Ghostbusters models or get a movie-based set from Creator Expert or Ideas themes. I’ve listed some of the best substitutes for the LEGO Ghostbusters ECTO-1 10274 set, so let’s take a look at their features.

Back to the Future Time Machine 10300 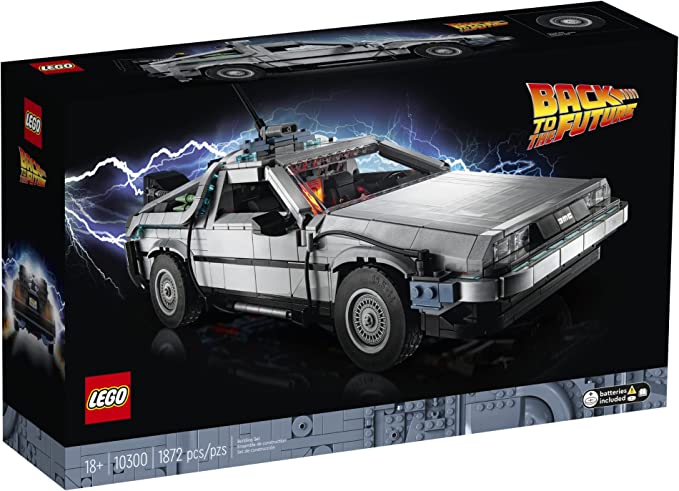 If you’re a fan of 1980s science fiction comedies and love challenging LEGO builds, you shouldn’t miss out on the Back to the Future Time Machine 10300 set. The set has nearly 2,000 pieces, and constructing it requires both patience and impressive skills. This Creator Expert model comes with Marty McFly and Doc Minifigures and a display plaque with basic information about the vehicle.

You can choose between three alternate versions of the DeLorean time machine inspired by its appearance in all three movie sequels. Hence, you can install the plutonium chamber and a lightning rod, add the Mr. Fusion Home Energy Reactor or mount whitewall tires. 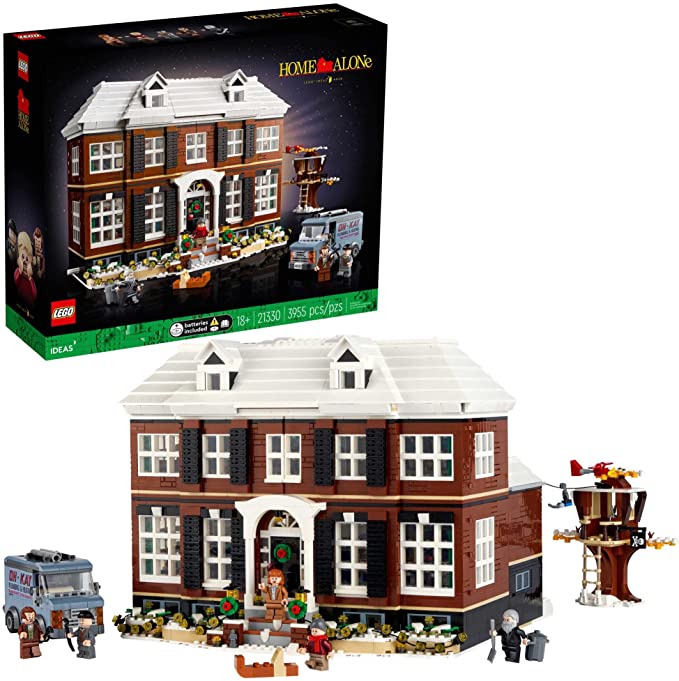 You can revisit Kevin’s Christmas adventure with the Wet Bandits by constructing the Home Alone 21330 set. The incredibly detailed model of Kevin’s house has six rooms equipped with furniture, Christmas decorations, and a variety of accessories Kevin uses to defeat Marv and Harry.

You can easily move the walls and roof to gain access to the house’s interior if you want to recreate scenes from the movie. The modular van and treehouse with a zipline are also included in the set, as well as Kevin, Marv, Harry, Kate, and ‘Old Man’ Marely Minifigures.

This LEGO Ideas model has 3,955 pieces, and it’s designed for adult LEGO builders. 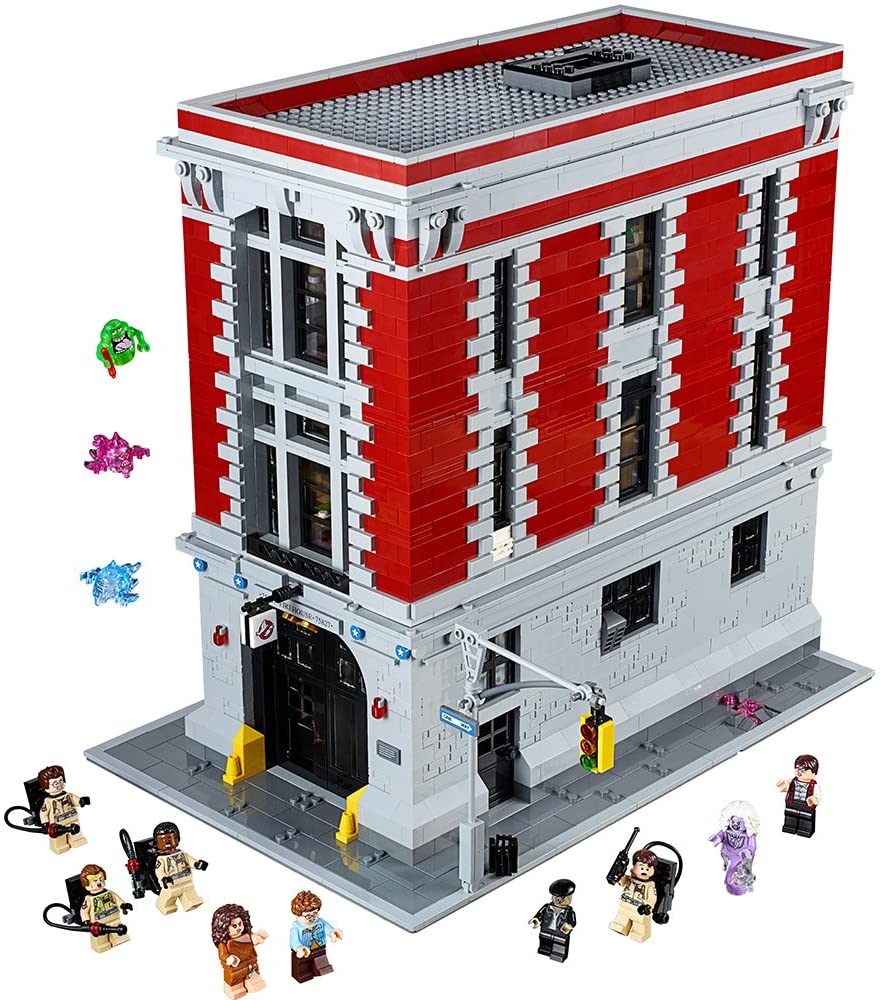 Even though it was discontinued years ago, the Firehouse Headquarters 75827 is still the biggest LEGO Ghostbusters set ever.

The replica of the three-story firehouse that served as the Ghostbusters headquarters features a laboratory, garage bay, dark room, offices, sleeping area, recreation room, containment unit, and a bathroom. In addition, it has a fireman’s pole that lets you slide Minifigures to the garage bay.

You can combine this set with the Ghostbusters ECTO-1 10274 or ECTO-1 21108 models to recreate your favorite scenes from the movie. The Firehouse Headquarters set is hard to find, and you may have to spend more than $1,000 to get it.

Question: How long does it take to build the Ghostbusters ECTO-1 10274 set?

Answer: Constructing this set takes six to seven hours, sometimes more, depending on the builder’s skills.

Question: Can I order Ghostbusters Minifigures from LEGO?

Question: Is the Ectombile’s gunner seat big enough to fit a Minifigure?

Answer: Yes, you can place a Minifigure in the gunner seat.

Question: What is the ladder element in the Ghostbusters ECTO-1 set made of?

The latest version of the LEGO ECTO-1 vehicle is one of the most impressive active sets in the Creator Expert theme. The Ghostbusters ECTO-1 10274 is also the second biggest LEGO Ghostbusters set that lets builders construct a detailed replica of the remodeled 1959 Cadillac Miller-Meteor Sentinel limo.

The LEGO display model captures the shape of the original vehicle beautifully, while action features like the gunner seat or the trap door lever make it more entertaining. So, if you’re a movie buff or enjoy building LEGO car and vehicle sets for adults, you’ll love every moment of constructing this set.

Are you looking for Creator Expert sets for adult LEGO fans? Glance through our Botanical Collection review to find out what sets from this unique collection have to offer.