The collaboration between LEGO and Disney started a decade ago, and during that time, we’ve seen some impressive models inspired by the characters from Disney movies. In this LEGO Disney Train set review, I’ll take a closer look at one of the best LEGO models from the Disney theme.

The fact that the Disney Train and Station 71044 set is still in production more than two years after the release speaks volumes about its quality and popularity. This set is in high demand, and some online retailers have already increased its price.

LEGO announced the plan to retire this set at the end of 2021, but its exit date was postponed indefinitely. However, this model will be discontinued in 2022, which will increase its value exponentially.

Our guide to the best LEGO Disney sets can help you discover some of the most popular sets in this theme.

The Disney Train and Station 71044 is one of the most exciting Disney-themed LEGO sets ever made, and you won’t regret buying it. Keep in mind that this model comes with a high price tag, and its price will continue to rise after LEGO retires it.

One of the biggest LEGO Disney sets ever was published in September 2019, and soon after its release, this set became one of the theme’s most popular models. Even though it has nearly 3,000 pieces, this set is suitable for LEGO fans aged 12 or older.

Although it is time-consuming, assembling this set doesn’t require extensive set-building experience. The train model is based on the C.K Locomotive from the original Disneyland amusement park in California, while the train station is a replica of the Main Street U.S.A station.

The Disney Train and Station 71044 is also one of the rare sets from this theme containing Powered Up elements that allow you to control the train via an app or play sound effects.

Please read our guide to the best LEGO Disney castle sets to discover some of the best sets from this theme based on castles from different Disney movies. 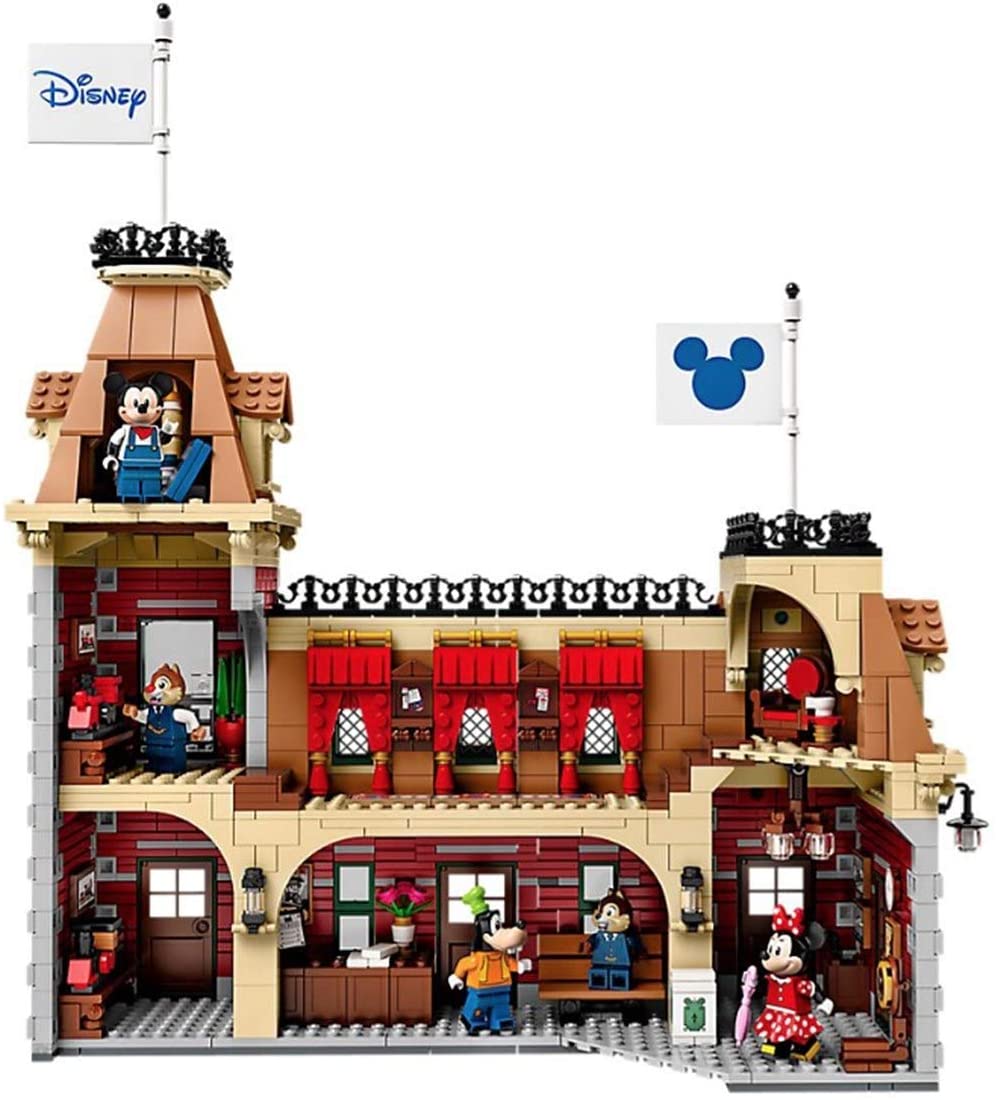 The set’s box is beautifully designed, and its front side reveals the contents of the box. All standard information about the set’s title, recommended age group, and piece count is positioned carefully so that it doesn’t distract the viewer from the train and station models.

Two images of the actual C.K Locomotive and Main Street U.S.A station are included on the box’s underside, while pictures of different rooms inside the station and a fully assembled train model are located below them.

The first booklet contains several pages of information about Walt Disney’s fascination with trains, as well as the station and train that served as inspiration for the set.

The building instructions for the passenger cars, the Presidential Parlour Car, and the station are featured in booklets numbered two through four. Check out our guide to the best LEGO Toy Story sets for more information about models based on this movie franchise.

Glancing Through the Set’s Pieces and Minifigures

This set doesn’t contain exclusive pieces except for the head for the Goofy Minifigure. However, the medium nougat piece and several parts featured in other LEGO sets are available in unique colors.

The last few pages of the fourth building instructions booklet contain the list of all pieces included in the set, and you can browse through it to find the I.D. number of a specific part or element.

This set comes with Mickey Mouse, Minnie Mouse, Chip, Dale, and Goofy Minifigures dressed in train-themed costumes. Aside from the Goofy Minifigure that is exclusive to this set, all other Minifigures are featured in other Disney sets, although in different outfits.

Please go through our guide to the best LEGO Disney Minifigures to find out more about the most valuable LEGO Minifigures inspired by classic Disney characters. 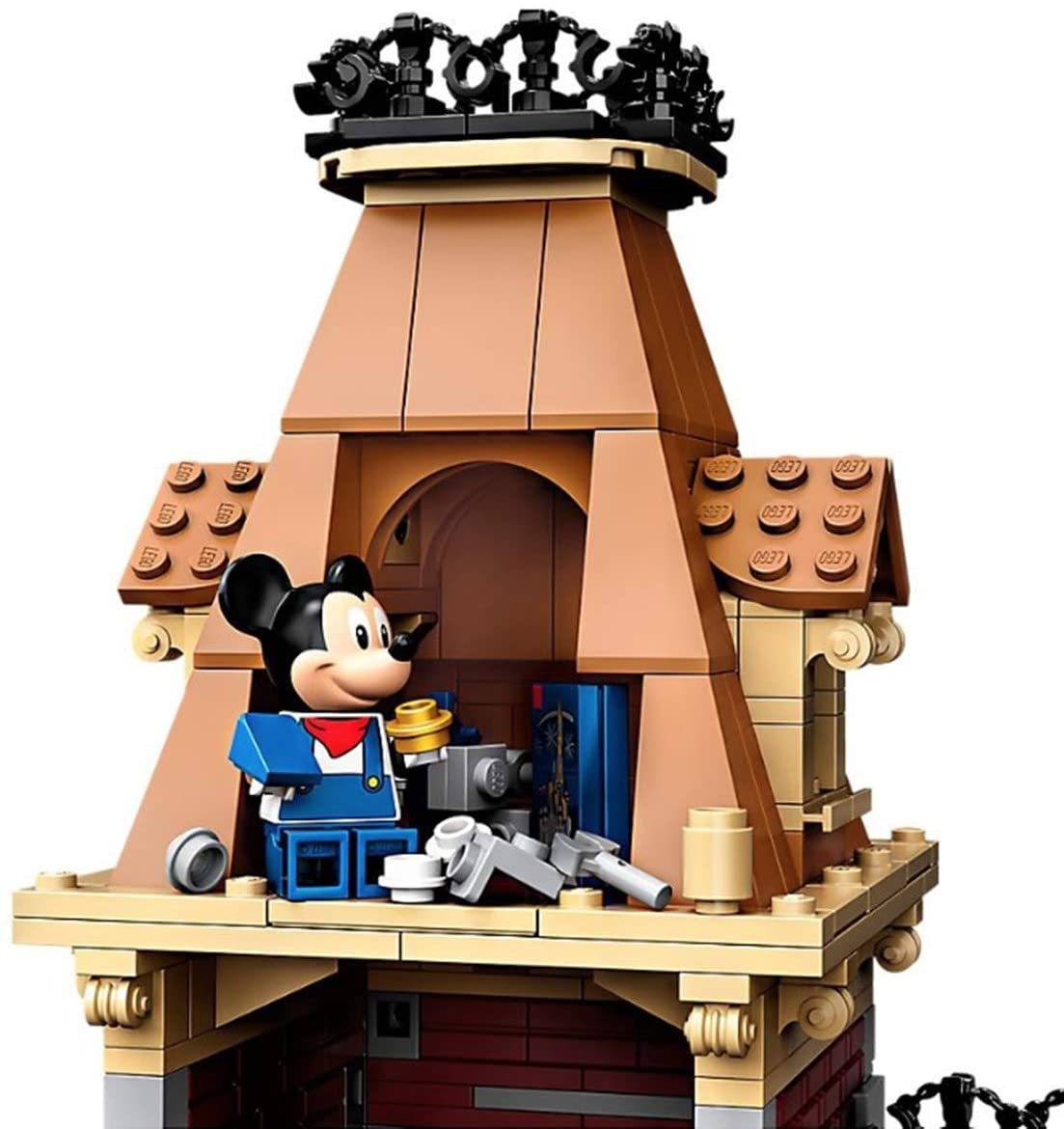 As I already pointed out, this set’s pieces are divided into 18 bags. I don’t recommend emptying the contents of all bags into a single tray because you’ll have to dig through 2925 pieces to find the ones you need to complete a specific step of the assembly process.

The C.K Locomotive is the first set’s element you’ll construct. The building instructions for this element are included in the first booklet. This stage of the assembly process has more than a hundred steps, and it involves building the train’s engine, the driver’s compartment, and the Mickey Mouse Minifigure.

This booklet also contains instructions on how to assemble the Dale Minifigure and the tender containing the Powered Up element that connects to the locomotive. The second and third booklets include the building instructions for the gondola passenger car, The Presidential Parlour Car, and the oval railway track.

The final stage of the construction process is perhaps the most challenging because you’ll have to go through nearly 250 steps to build a replica of the Main Street U.S.A Station that contains multiple rooms equipped with chandeliers, window drapes, and countless other accessories.

The stickers are applied to various pieces throughout the construction process giving the train and station models a finished look. Please go through our guide to the best LEGO Disney Princesses to discover some of the most popular models inspired by Disney princesses.

Even though it can take several days, the assembly process is rewarding. The completed train and station models are impressive, and you can also download the LEGO Powered Up app that lets you control the train remotely or adjust its speed.

The train cars don’t contain a lot of details, but they have rich interiors and are large enough to fit multiple Minifigures. The station model has seven rooms and an incredibly detailed interior stacked with accessories like the front desk, chairs, tables, or flowerpots.

Our guide to the best LEGO Frozen sets can help you find a model from the Disney theme inspired by Frozen movies.

In addition, placing the Chip and Dale conductors in one of the cars or using the Mickey Mouse Minifigure as an engineman allows young Disney fans to develop a variety of play scenarios while the train is running on the oval tracks.

The station model offers even more play options than the train toy because it features a wide assortment of accessories and different rooms where passengers can buy tickets or wait for the train. It’s worth noting that this set can be overwhelming for preschoolers or kids under 10.

Please read our guide to the best Winnie the Pooh LEGO sets if you’d like to learn more about models inspired by this Disney character.

Like all LEGO sets with high piece counts, the Disney Train and Station 71044 is expensive. The set’s price on the manufacturer’s website is a bit over $300, which in my opinion, is an excellent deal for a collectible Disney set.

Some online retailers offer this set at a much higher price, and you’ll have to spend twice as much if you cannot order this model from the LEGO website.

This set will retire soon, and when it does, its price will increase exponentially, but there’s no reason to overspend on it if you can purchase it at a more affordable price. 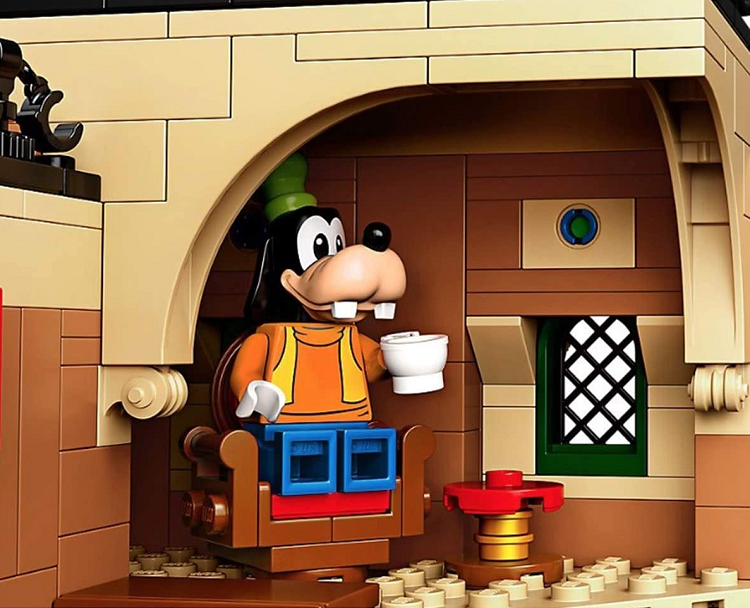 The Best Alternatives to the Disney Train and Station 71044 Set

Only a few active Disney sets feature train toys, and considering models published in other LEGO themes is the best choice if you’d like to get a set containing a train toy compatible with LEGO tracks. On the other hand, you’ll have a variety of options if you’re looking for a Disney-themed set with a high piece count.

These sets are not designed for the same age groups, and their piece counts vary from less than a hundred to more than 4,000 pieces. I’ve selected several alternatives to the Disney Train and Station 71044 set, so let’s take a look at their properties. 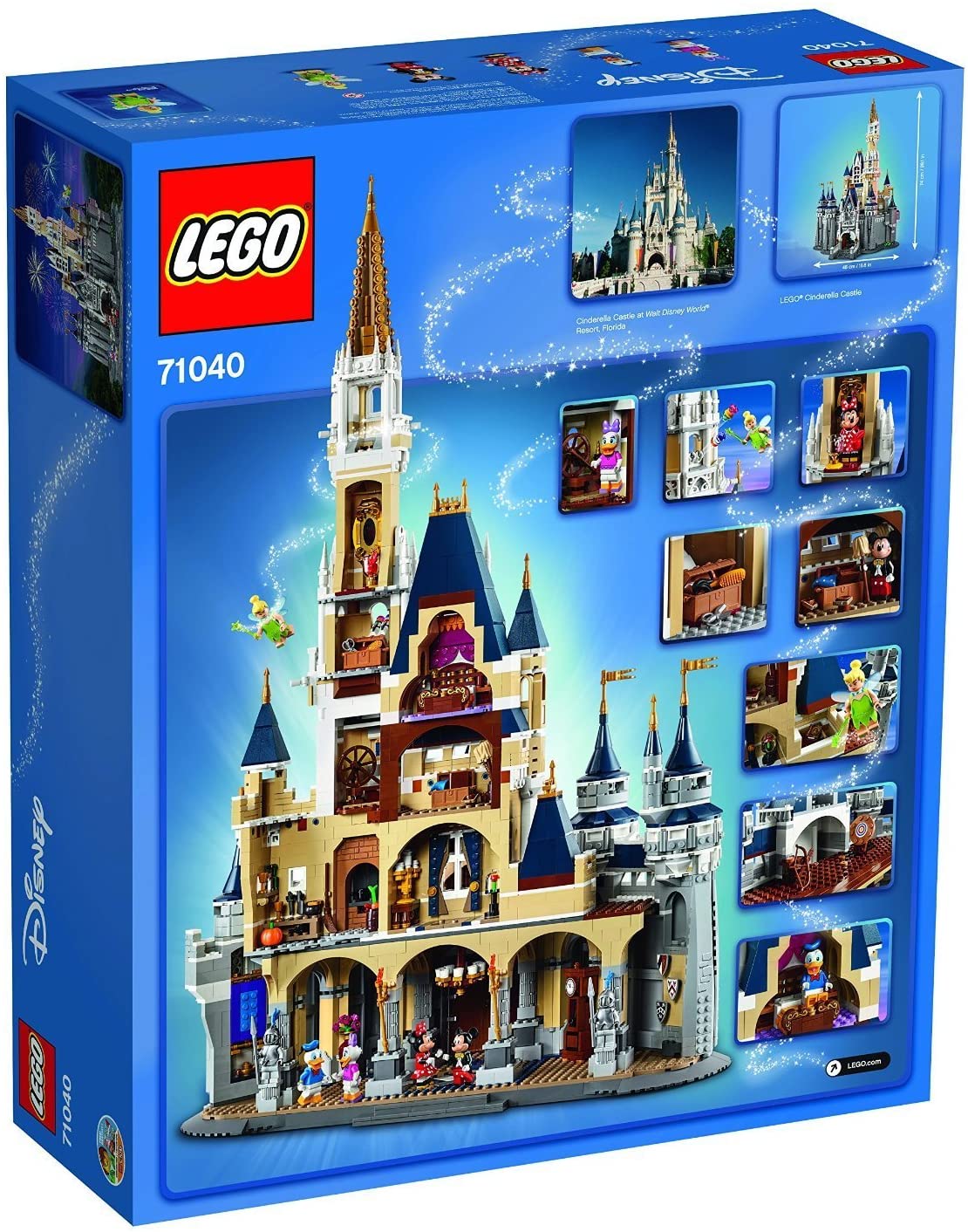 LEGO and Disney fans searching for a set that will challenge their set-building skills should consider getting The Disney Castle 71040 set. LEGO released this set in 2016, and six years later, it is still the biggest and the most popular model in the Disney theme.

The display model of the Disney castle is 29 inches tall, 18.8 inches wide, and 12 inches deep. Accessing its interior is easy, and you can explore different rooms in the four-story main building or the five-story tower.

Mickey Mouse, Minnie Mouse, Donald Duck, Daisy Duck, and Tinker Bell Minifigures are included in the set, as well as a variety of accessories like a golden lamp or a floor-standing vase. 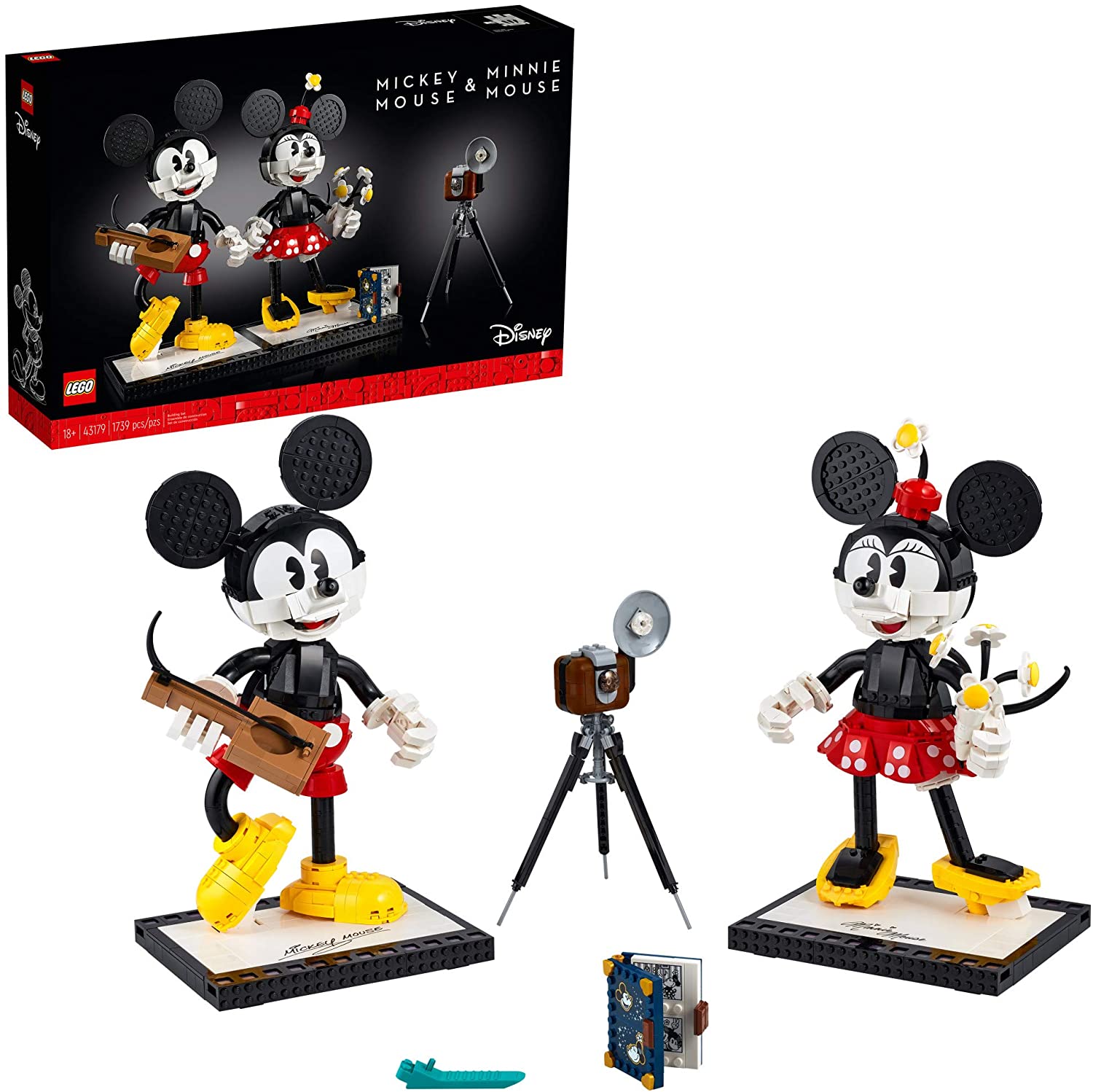 The LEGO Disney theme doesn’t contain a lot of display sets designed for adults. The Mickey Mouse & Minnie Mouse Buildable Characters 43179 is one of the theme’s best display sets that offers an engaging construction experience.

The 14 inches tall Mickey figure is holding a buildable guitar accessory, while the 13-inch tall Minnie figure is holding a flower bouquet. Both figures are placed on signed celluloid strip display stands, and they are posable, so you can easily change the position of their arms or legs. 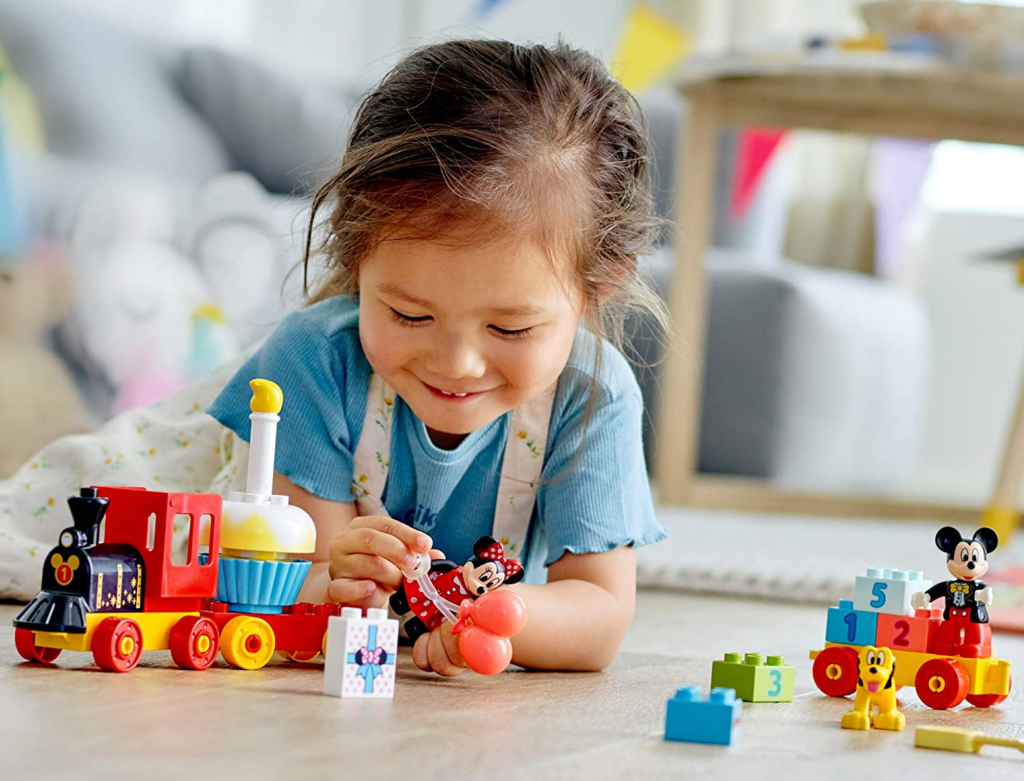 The Mickey & Minnie Birthday Train 10941 set is designed for toddlers aged two or older, and all of its elements are comprised of Duplo pieces. The train toy has a locomotive and two flatcar sections large enough to fit the birthday cake with a candle.

The set also features two gift elements and five numbered bricks that can help preschoolers learn basic numbers or develop motor skills. Children can play with Pluto, Mickey, and Minnie Minifigures or use different accessories to recreate a birthday party.

Question: Who is the Designer of the LEGO Disney Train and Station 71044 Set?

Answer: Yes, the train toy can’t run without batteries, but you’ll have to purchase the batteries separately.

Question: Does the Gondola Passenger Car Have Seats?

Answer: Yes, it does. The seats in this section of the train are positioned sideways, and they can accommodate all Minifigures featured in the set.

Question: Where is the Miniature Model of the Disney Castle Located?

Answer: The miniature model of Disney Castle is located in the station’s tower room.

A few years after LEGO published the Disney Train and Station 71044, this set is still one of the exciting models in the Disney theme. The train toy with Bluetooth and remote control functions, a large train track, and unique Minifigures are some of the reasons why this set has remained so popular for so long.

The Main Street U.S.A station’s detailed replica contains multiple rooms equipped with authentic accessories inspired by the objects you can see at the actual station. Sadly, LEGO plans to retire this set after more than two years on the market, and you may not be able to get it at its original price.

Was this Disney Train and Station 41044 review useful? Let me know in the comments, or continue reading our LEGO Hogwarts Castle review to learn more about the biggest Harry Potter set to date.